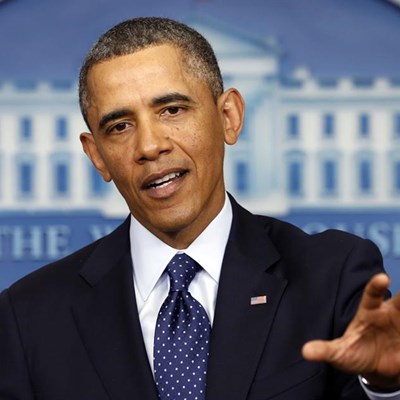 Obama told Francis he was a "great admirer" at the start of their talks at the Vatican, which political observers said could be a bid to boost the US president's support at home among Catholic voters.

The closed-door talks between the first African-American US president and the first pope from Latin America lasted around 50 minutes - slightly longer than papal meetings with other world leaders.

The White House said Obama had been hoping to speak to Francis about their "shared commitment to fighting growing inequality" as well as the Middle East peace process, the environment and immigration reform.

The two exchanged gifts afterwards, with the pope offering Obama a copy of his "apostolic exhortation" from last year in which he excoriated global capitalism and also reiterated his firm opposition to abortion.

"I actually will probably read this in the Oval Office when I'm deeply frustrated. I'm sure it will give me strength and calm me down," a smiling Obama said.

The US leader gave the pope a chest with fruit and vegetable seeds used in the White House Garden.

"If you have a chance to come to the White House, we can show you our garden as well," the president said -- to which the pope replied: "Absolutely!"

The meeting comes as a welcome rest-stop for Obama during a six-day European tour dominated by the crisis over Crimea, and the US leader will doubtless be hoping some of the pope's stardom will rub off on him.

During his visit to the Eternal City, Obama also met President Giorgio Napolitano and was scheduled to hold talks with Prime Minister Matteo Renzi - the European Union's youngest government leader, as well as going on a private guided tour of the Colosseum.

In an interview with Italy's Corriere della Sera daily ahead of the meeting, Obama said Francis "has been an inspiration to people around the world, including me".

But he added: "It doesn't mean we agree on every issue".

Obama said earlier this month his calls for tax hikes on the rich and curbs on abuses by big banks had a strong moral grounding - in an election-year swipe at Republicans that echoed the pope's rallying cry for action to reduce the gap between rich and poor.

But he has been deeply at odds with US Catholic leaders over his support for gay marriage and a controversial healthcare reform that requires for-profit corporations to provide insurance including for contraception.

The pontiff also spoke out strongly against a proposed military intervention by the US in Syria last year, organising a mass prayer vigil at the Vatican.

Vatican expert John Allen wrote in the Boston Globe that the president's visit was taking place "with an eye towards the mid-term elections looming this fall".

Controversy over the Affordable Care Act and Obama's drop in popularity risk triggering a Republican victory in this year's mid-term elections, which would weaken the US leader for his remaining two years in power.

However, Vatican experts say the relationship is not as cosy as it once was between pope Jean Paul II and Ronald Reagan, and Francis is unlikely to refrain from tackling Obama on his domestic and foreign policy.

Words of support from Francis could certainly boost Obama: a recent survey by Saint-Leo University found Francis was popular with 63 percent of Americans.