Kim was greeted by women in folk costumes with bread and salt in a traditional greeting.

The meeting on Russky island near the Pacific port of Vladivostok in Russia will be Kim's first face-to-face talks with another head of state since returning from his Hanoi summit with US President Donald Trump, which broke down without a deal on the North's nuclear arsenal in February.

Kim will be looking for Putin's support in easing the sanctions imposed on Pyongyang over its nuclear programme - possibly including continued employment for North Korean guest workers in Russia beyond a December deadline.

For its part Moscow is keen to exert influence in another global flashpoint.

Kim's armoured train rolled in to Vladivostok's Tsarist-era station on Wednesday, the North Korean leader stepping out onto a red carpet on the platform wearing a long black coat and fedora.

In Hanoi, the cash-strapped North demanded immediate relief from sanctions, but the talks broke up in disagreement over what Pyongyang was prepared to give up in return. 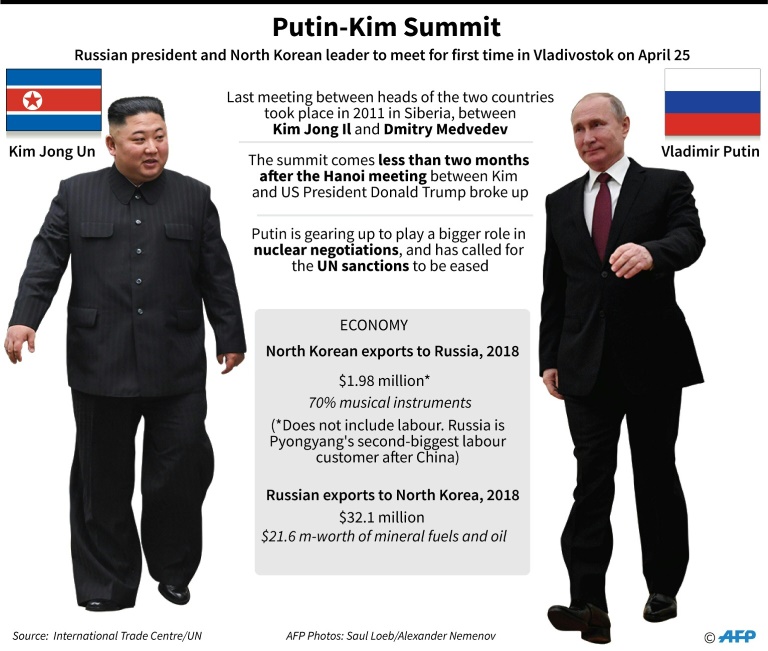 North Korea last week launched a blistering attack on US Secretary of State Mike Pompeo, insisting he be removed from the negotiations just hours after announcing it had carried out a new weapons test.

Pompeo said on Wednesday he expected "bumpy" talks ahead with Pyongyang but that he still hoped to reach a potentially landmark denuclearisation deal.

The Soviet Union was once Pyongyang's biggest ally, and Russia has already called for the sanctions to be eased, while the US has accused it of trying to help Pyongyang evade some of the measures - accusations Russia denies.

"I hope this visit will be successful and useful," Kim told Russian television in the border town of Khasan, where women in folk costumes welcomed him with bread and salt in a traditional greeting.

"I hope that during the talks... I will be able to have concrete discussions on resolving situations on the Korean Peninsula and on the development of our bilateral relationship."

Russian and North Korean flags were flying on lamp posts on Vladivostok's Russky island, where the summit was to take place at a university campus.

The talks follow repeated invitations from Putin since Kim embarked on a series of diplomatic overtures last year. 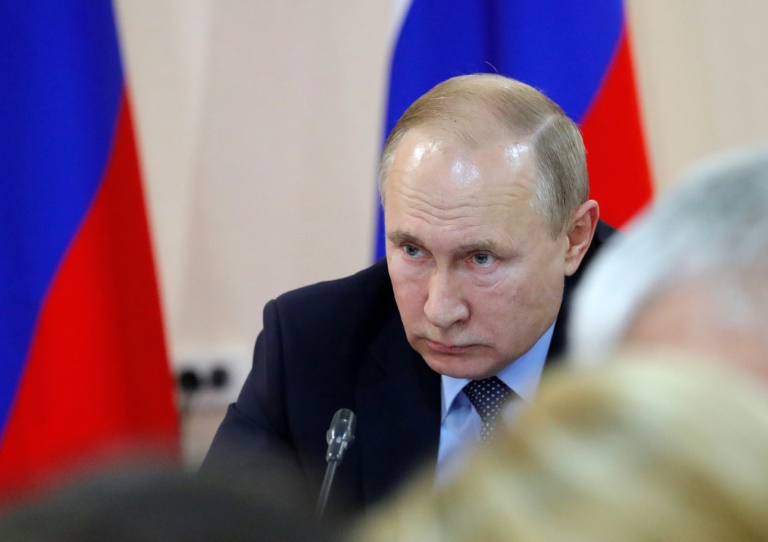 The Kremlin has said the focus of the talks will be on finding "a political and diplomatic solution to the nuclear problem on the Korean Peninsula" but that no joint statement or signing of agreements was planned.

Kremlin spokesman Dmitry Peskov said Wednesday that the six-party talks on North Korea's nuclear programme - launched in 2003 with the participation of North and South Korea, China, Japan, Russia and the United States - remained the best option for finding solutions but that other efforts were worth looking at.

"There is currently no other effective international mechanism," Peskov told reporters.

"On the other hand... all efforts deserve support if they are really pursuing the goal of denuclearisation and resolving the problems of the two Koreas."

Moscow was a crucial backer of Pyongyang for decades and their ties go back to the founding of North Korea, when the Soviet Union installed Kim's grandfather Kim Il Sung as a leader. 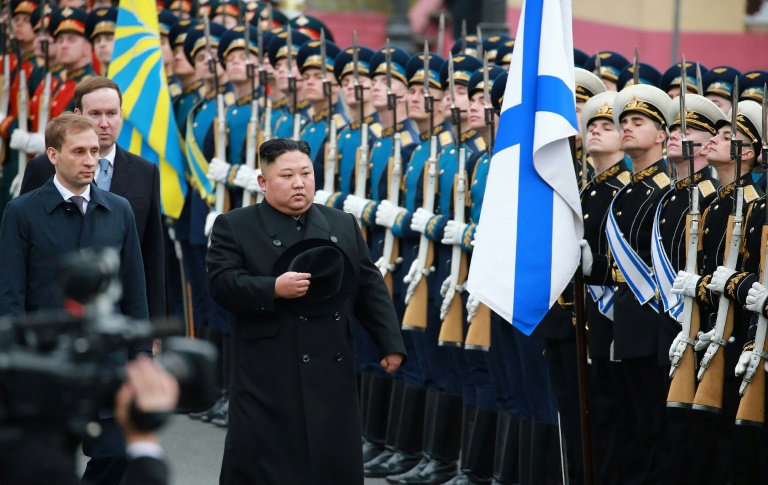 Kim will be looking for Putin's support in easing the sanctions imposed on Pyongyang over its nuclear programme.

The Soviet Union reduced funding to the North as it began to seek reconciliation with Seoul in the 1980s, but Pyongyang was hit hard by its demise in 1991.

Soon after his first election as Russian president, Putin sought to normalise relations and met Kim Jong Il - the current leader's father and predecessor - three times, including a 2002 meeting also held in Vladivostok.

China has since cemented its role as the isolated North's most important ally, its largest trading partner and crucial fuel supplier, and analysts say Kim could be looking to balance Beijing's influence.

While ties between Moscow and Pyongyang have remained cordial, the last meeting between their leaders came in 2011, when Kim Jong Il told then-president Dmitry Medvedev that he was prepared to renounce nuclear testing.

His son has since overseen by far the country's most powerful blast to date, and launch of missiles which Pyongyang says are capable of reaching the entire US mainland.