The UN deployed peacekeepers to Mali in 2013 after a jihadist-backed insurgency erupted in the north of the country. Violence has since spread to the centre, inflamming long-running hostilities between ethnic groups.

INTERNATIONAL NEWS - Nearly 100 people were killed in a gruesome overnight attack on a village in central Mali, in the latest violence to strike the fragile region, authorities said Monday.

There was no immediate claim of responsibility but the massacre, targeting a village inhabited by the Dogon community, bore the hallmarks of tit-for-tat ethnic attacks that have claimed hundreds of lives.

It came less than three months after nearly 160 members of the Fulani ethnic group were slaughtered by a group identified as Dogon.

"This country cannot be led by a cycle of revenge, and vendetta," Mali's President Ibrahim Boubacar Keita told ORTM public television from Switzerland, where he said he was cutting short an official visit.

He called on Malians to come together to "allow our nation to survive, because this is a question of survival." 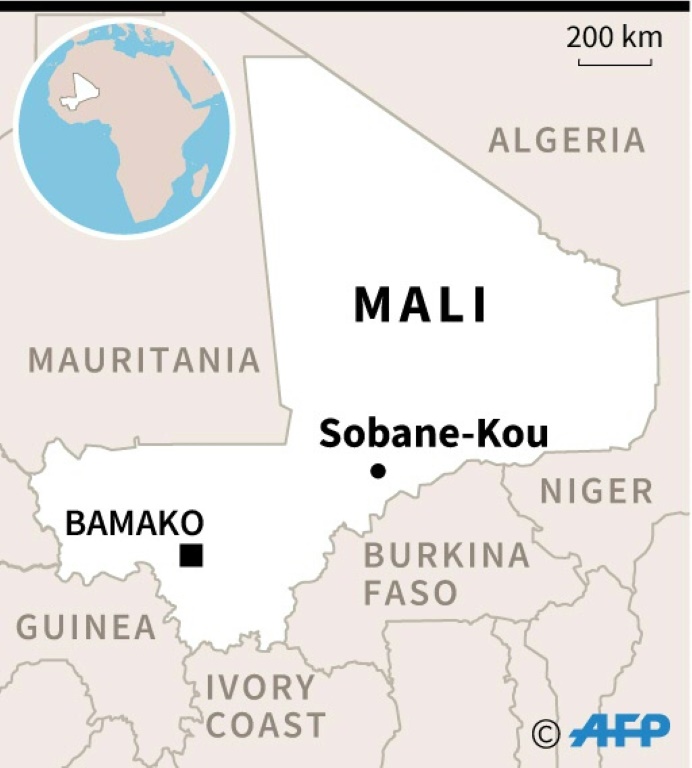 Map locating the village of Sobane-Kou in Mali.

Local officials in Koundou district, where the Sobane-Kou village was attacked, told AFP 95 people were killed, their bodies burned and others were still missing.

The government, giving a provisional toll, said 95 people had been killed, 19 were missing, numerous farm animals had been slaughtered and homes had been torched.

"Armed men, suspected to be terrorists, launched a murderous attack on this peaceful village," it said in a statement.

A Malian security source at the site of the massacre said "a Dogon village has been virtually wiped out."

A survivor who gave his name as Amadou Togo said "about 50 heavily armed men arrived on motorbikes and pickups."

"They first surrounded the village and then attacked - anyone who tried to escape was killed.

"Some people had their throats cut or were disembowelled, grain stores and cattle were torched. No-one was spared - women, children, elderly people."

The local official said the village had a population of about 300.

An association of Dogon traditional hunters, called Dan Nan Ambassagou, deplored the "barbaric and vile" attack which it described as tantamount to genocide.

A brutal cycle of violence in central Mali, an ethnic mosaic, began after a predominantly Fulani jihadist group led by preacher Amadou Koufa emerged in 2015.

Since jihadists recruited mainly from Fulanis, they became associated with them, fuelling tensions with other ethnic groups such as Bambara and Dogon. The Fulani are primarily cattle breeders and traders, while the Bambara and Dogon are traditionally sedentary farmers.

On May 16, the UN peacekeeping mission in Mali (MINUSMA) announced it had recorded "at least 488 deaths" in attacks on Fulanis in the central regions of Mopti and Segou since January 2018.

In the bloodiest raid, about 160 Fulani villagers were slaughtered on March 23 at Ogossagou, near the border with Burkina Faso, by suspected Dogon hunters.

According to MINUSMA, armed Fulanis had "caused 63 deaths" among civilians in the Mopti region, also since January 2018.

"It's a shock, a tragedy," MINUSMA chief Mahamat Saleh Annadif said of the latest bloodletting, noting that it came at a time "when we are discussing the renewal of the (MINUSMA) mandate."

There are currently about 14,700 troops and police deployed in Mali, which ranks as the most dangerous UN mission, with 125 peacekeepers killed in attacks since deployment in 2013.

Donor countries to MINUSMA are to meet at the UN on Wednesday. A decision on renewing the force's mandate is expected by June 27.

UN warning
Speaking at the UN headquarters in New York, Annadif voiced regret that the Malian authorities had not been present enough in the area to prevent such violence.

Just a week earlier, UN Secretary General Antonio Guterres had warned of a "high risk" of atrocities and called on the government to strengthen its response to extremist groups.

"If these concerns are not addressed, there is a high risk of further escalation that could lead to the commission of atrocity crimes," he wrote in a report to the UN Security Council.

On Monday, Guterres' spokesman said the secretary general was "outraged" by the massacre and that he called "on the Malian authorities to investigate this tragedy and to bring the perpetrators to justice."

The Malian government meanwhile expressed its condolences and said "every measure will be taken to arrest and punish those responsible for this bloodshed."

"Reinforcements are currently deployed in the sector and carrying out a wide-ranging search," it said in a statement.

MINUSMA was established after French troops in 2013 pushed back radical Islamists who seized the north of the country following an uprising by Tuareg rebels.

A peace agreement signed in 2015 by the Bamako government and armed groups aimed at restoring stability.

But the accord failed to stop jihadist violence, which then shifted to central Mali, inflaming ancient inter-ethnic hostility.

Koufa in March 2017 joined the newly-formed Group to Support Islam and Muslims (GSIM), the leading jihadist alliance in the Sahel region, with links to Al-Qaeda. Its leader is Iyad Ag Ghaly.