Navalny is known for his anti-corruption campaigns against top officials and outspoken criticism of President Vladimir Putin.

INTERNATIONAL NEWS - The Russian opposition leader Alexei Navalny was in intensive care in a Siberian hospital on Thursday after he fell ill in what his spokeswoman said was a suspected poisoning.

Navalny, a 44-year-old lawyer and anti-corruption campaigner who is among President Vladimir Putin's fiercest critics, was being treated in a hospital in the city of Omsk after he lost consciousness on a flight to Moscow and his plane made an emergency landing.

His spokeswoman Kira Yarmysh wrote on Twitter that Navalny had been placed in a coma on a ventilator and that tests were being carried out.

"Alexei has toxic poisoning," she wrote. "Alexei is now in intensive care."

"I'm sure it was intentional poisoning," she told the Echo of Moscow radio station.

State news agency TASS reported that Navalny was in the intensive care unit for toxicology patients in Omsk Emergency Hospital No. 1.

"He is in a serious condition," the hospital's chief doctor Alexander Murakhovsky told TASS.

The hospital's deputy head Antoly Kalinichenko told journalists: "He is on a ventilator, his condition is stable."

He said a diagnosis should be established Thursday but that doctors have "no confidence as of today that the reason for his condition is poisoning".

'Something in his tea'
Yarmysh said that police and investigators had arrived and questioned a doctor.

"We think that Alexei was poisoned with something mixed in his tea. That was the only thing he drank in the morning," she wrote on Twitter.

The head of the legal department of the Anti-Corruption Foundation that Navalny heads, Vyacheslav Gimadi, wrote on Twitter that "there is no doubt that Navalny was poisoned for his political position and activity."

He said Navalny's lawyers were requesting an investigation into the attempted assassination of a public figure.

Navalny has previously suffered physical attacks, and a number of Kremlin critics have been poisoned in the past.

He endured chemical burns to his eye in 2017 when attackers threw green dye used as a disinfectant at his face outside his office.

In August last year Navalny suffered rashes and his face became swollen while he was in a police detention centre serving a short term for calling for illegal protests.

'Quickly lost consciousness'
He was taken to hospital where doctors said he had suffered an allergic reaction but Navalny asked for an investigation into poisoning.

"He was poisoned in the police detention centre. I'm sure that now the same thing happened. It's different symptoms, evidently a different drug," Yarmysh told Echo of Moscow.

She told the radio station that she met Navalny to go to the airport in the Siberian city of Tomsk on Thursday morning when he seemed "absolutely fine". 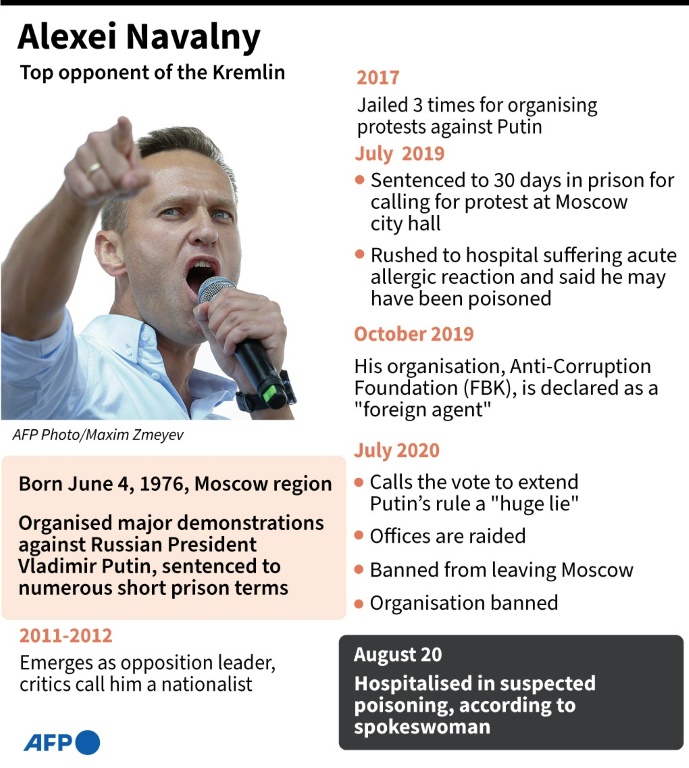 "He only drank black tea in the airport," she said.

"Straight after takeoff he quite quickly lost consciousness."

A witness posted a photo on social media of Navalny drinking from a paper cup at an airport cafe.

The REN TV channel posted a video shot from the plane of him being wheeled on a stretcher into an ambulance.

Navalny, a charismatic lawyer and whistleblower, is travelling the country to promote a tactical voting strategy to oppose pro-Putin candidates in more than 30 regional elections in September.

He has been the target of multiple criminal probes, while his Anti-Corruption Foundation is regularly raided by police and investigators.

He has served numerous terms in police cells for organising illegal protests.

Yarmysh said they had been on a work trip to Tomsk.

Former US ambassador to Moscow Michael McFaul tweeted: "Praying @navalny will be ok."

The incident involving the highest-profile opposition figure in Russia follows other poisonings of Kremlin critics in and outside the country.

Britain named two Russian military intelligence agents as suspects after Russian double agent Sergei Skripal and his daughter Yulia were poisoned with nerve agent Novichok in the city of Salisbury in March 2018.

Several other opposition figures have suffered severe illnesses in Russia that they blamed on poisoning.