The deadly crush overnight into Friday at Mount Meron in northern Israel has been described as one of the worst peace time disasters since the nation's founding in 1948.

Following a pause for the Sabbath, Ultra-Orthodox Jews have been holding funerals for those killed in one of Israel's worst peacetime disasters.

INTERNATIONAL NEWS - Flags were lowered to half mast on Sunday as Israel held a national day of mourning for 45 men and boys killed in a stampede at a packed ultra-Orthodox Jewish festival.

The deadly crush overnight into Friday at Mount Meron in northern Israel has been described as one of the worst peace time disasters since the nation's founding in 1948.

The stampede happened as tens of thousands of people thronged the reputed tomb of Rabbi Shimon Bar Yochai to commemorate the second-century Talmudic sage's death and mark the Lag BaOmer holiday.

Some families managed to bury their dead before the Sabbath began on Friday evening.

Funerals continued late Saturday and Sunday, as the Abu Kabir National Center of Forensic Medicine said that all the dead had been identified.

"At around midnight, the identification of all 45 victims of the Meron disaster was completed," the centre's director, Chen Kugel, said.

"A disaster of this magnitude requires complex analytical work," he added, stressing the centre had been sensitive towards the needs of the bereaved while maintaining "professionalism".

Nerve-wracking hours
The stampede in the male section of the gender-divided site is believed to have started as people moved through a narrow passageway that became a deadly choke-point.

Dvir Hadani, a 30-year-old who attended a memorial service in Tel Aviv, recounted an excruciating wait as he tried to contact his father, a rabbi in Meron, who had been at the site.

"They were nerve-wracking hours until we made contact and I realised he was fine, thank God," Hadani told AFP. 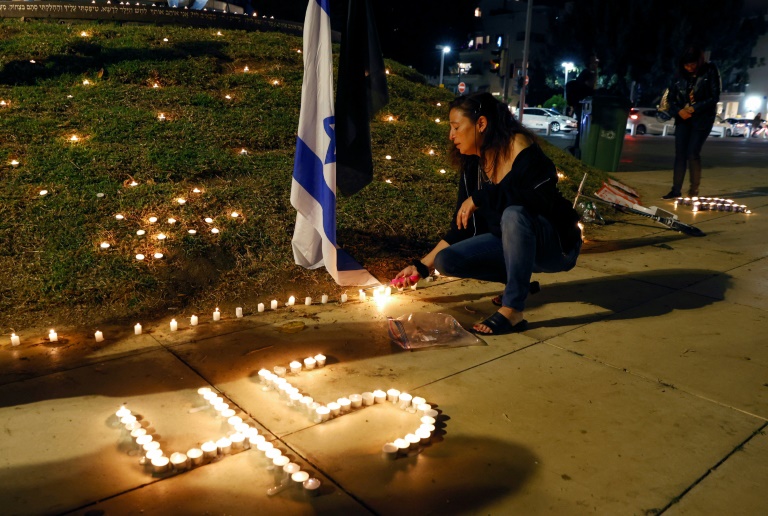 People in Tel Aviv on Saturday held a vigil for those killed in the stampede.

Rachel, a 28 year-old ultra-Orthodox Jewish women, said she had stopped going to the Meron pilgrimage eight years ago but her parents were there this year and left "an hour before" the stampede.

The blue and white Israeli flag was at half mast outside public buildings following a government decision to declare a national day of mourning.

Leading newspapers on Sunday demanded accountability for the tragedy, at a site with a history of safety concerns.

"Take Responsibility," read the headline in the Yediot Aharanot daily, listing a range of officials with questions to answer.

The pilgrimage site was closed last year due to coronavirus restrictions.

There had been warnings about viral transmission again this year but with Israel having fully inoculated more than half of its 9.3 million residents, police did not stop the massive crowd from gathering.

Beyond Covid risks, Israeli media cited long-standing concerns about feeble infrastructure at a site that has regularly attracted more than 100,000 pilgrims.

In a 2008 report, Israel's state comptroller had warned that "the tomb of Rabbi Shimon Bar Yochai is not prepared properly to take in tens and hundreds of thousands of people who arrive for mass events."

Public security minister Amir Ohana, a close ally of Prime Minister Benjamin Netanyahu has said that he too was willing to accept "responsiblity", while deflecting personal blame.

Transport minister Miri Regev has also faced criticism for allegedly allowing scores of public buses to carry people to the site, in defiance of safety concerns.

Netanyahu on Friday pledged a full investigation to avoid a repeat of the Meron tragedy, while Israel's chief Ashkenazi rabbi, David Lau, suggested Sunday that the pilgrimage be spread over a week to avoid overcrowding.