In Colombia, fleet of cartel narco-subs poses challenge for navy

INTERNATIONAL NEWS - For years, they were referred to in hushed tones simply as "Bigfoot" - a mythical creature rumored but never seen - but these days, the narco-submarines used by Colombia's drug cartels have become almost commonplace.

With cocaine production at an almost record high in the South American country, authorities on the southwestern coast say the crude semi-submersible craft have become a favored tool to smuggle drugs towards the United States - and even to Europe.

Thirty-three submarines were intercepted in 2019 alone, an average of almost three a month - most of them along Colombia's Pacific coast.

That is a major concern for Rear Admiral Mattos Dager and his "Poseidon" task force against drug trafficking.

"Large quantities of cocaine are transported by sea," Dager told AFP. "It is much easier to move a tonne of cocaine by sea than by plane because there are more checks on freight at airports."

According to the rear admiral, 80 percent of Colombia's illicit drug trade goes out through the Pacific and 14 percent is sent via the Caribbean.

The rudimentary submarines fashioned in secret workshops in the depths of Colombia's mangrove-fringed northwestern Pacific coast are notoriously difficult for navy patrols or radar to detect.

They cruise "flush with the surface of the water, and the superstructure that protrudes above the surface is very small," Dager said.

For all their recent success, Dager and his squad know that this is probably only the tip of the iceberg.

As with all drug shipment finds, once the initial euphoria subsides, there is the feeling that many more get through than are ever detected.

Last year, authorities seized 433 tonnes of cocaine - more than half of that by the navy - though production was estimated to be more than 1,000 tonnes.

The long-posed question of whether one of the narco-subs could be sophisticated and durable enough to cross the Atlantic was answered in November when a 22-meter vessel was discovered off Spain's Galician coast.

The semi-submersible was carrying around three tonnes of cocaine. Two of its three crew members were reportedly from Ecuador.

Evidence of the successes of Dager's task force is littered among the mangrove roots around its base in the southwestern port of Tumaco.

Painted in blue, gray and pastel greens, their rustic fiberglass hulls appear to have more in common with Jules Verne's "Nautilus" in his 19th century novel "Twenty Thousand Leagues Under the Sea" than a sophisticated seagoing submersible.

But these low-profile boats are designed to take to the sea with their decks awash, carrying their cargo just beneath the waves and out of sight.

Tumaco is situated just north of the Ecuador border, in Colombia's southwestern Narino department, which has more land under coca cultivation than anywhere else in the country - about a quarter of the 169,000 hectares (417,600 acres) under cultivation in 2018.

Nicknamed "the Pearl of the Pacific" for its stunning beaches but plagued by the nation's long conflict with narco gangs, Tumaco is a flashpoint in the war on drugs. 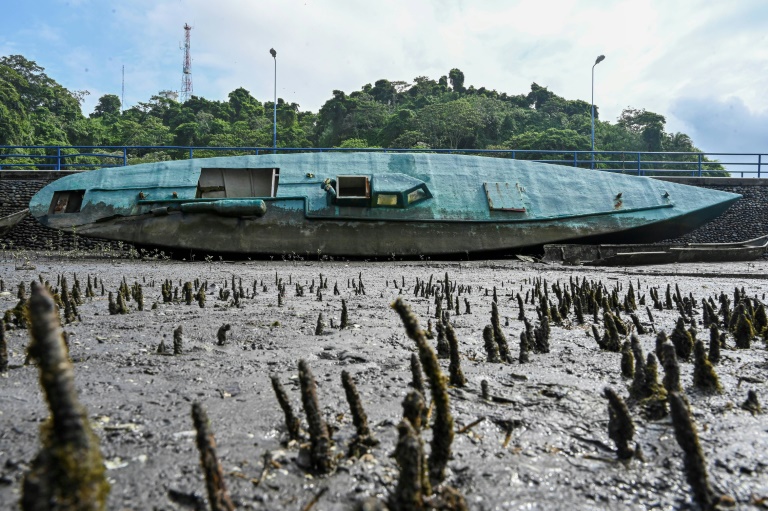 A seized drug smuggling submarine lies on its side at a Colombian coast guard base in Tumaco, Colombia.

Rumors that the cartels were using submarines began in the 1990s, but it was not until 2006 that the navy finally intercepted one, packed with 3.5 tonnes of cocaine, off Costa Rica.

The labyrinth of mangroves that make up 80 percent of Colombia's Pacific coast provide ideal cover for "artisanal boatyards" where the custom-built subs are made, according to Colonel Nelson Ahumada Ojeda, commander of the 4th Infantry Brigade, responsible for the Narino coastal strip.

The army has little chance of tracing the subs' launching platforms in "a spider's web of some 1,500 streams," Ojeda said.

The cramped subs are crewed by between two and four men, usually recruited from local fishing communities - often, they are Ecuadorans.

In case of discovery by naval patrols, "they open the valves to let in water and sink the boat, sinking the evidence," before jumping in the water, said Captain Victor Santos Pacheco, commander of the local coast guard, which often finds itself rescuing the crews from the sea.

The vessels can reach Central America in two or three days.

Those that head further north to the Mexican or US coast are replenished at sea with water, food, and fuel, indicating elaborate logistics.

Crew members can earn up to $50,000 for a long crossing, but see it as a risk worth taking, according to officials.

The task force has recently seen evidence that the subs are increasingly being used to transport marijuana.

"It could correspond to the fact that its consumption has been authorized in some countries," said Dager.

"This has opened up an interesting international market... considering that the production of marijuana in Colombia is very economical... at $100 a kilo, and it sells for up to $7,000 in the United States."

"The profits are just as big as for the sale of cocaine hydrochloride," he added.

The cartels are constantly upping the ante in a cat-and-mouse game on the high seas.

They are now using winged torpedo-like tubes known as "parasites" - fixed to the underside of large ships - to smuggle drugs, according to Pacheco.

They also have a new tactic - a GPS-equipped "buoyed cargo" designed for clandestine recovery at sea.

"Narco-traffic is innovative. It never stops," he said.