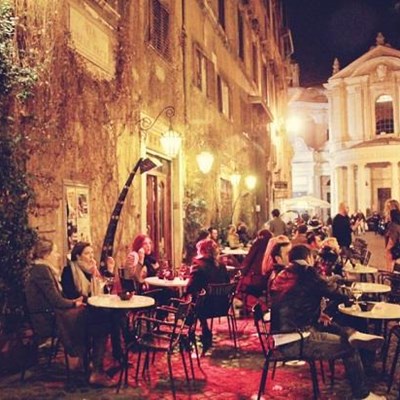 "The bailiff came on November 19," delivering a final payout offer from the landlord to vacate the premises, Anna Serafini Ripanti, told dpa. "The next time he comes round, he will tell me when I will have to clear the space," she added.

Culture Minister Dario Franceschini has been asked to stop the process on the grounds of protecting national heritage, Serafini Ripanti said. The Roman association of historic shops has also appealed to UNESCO, she added.

It was unclear whether any of these last-ditch moves will have any effect. Earlier this year, a public petition against the cafe's closure collected 40,000 signatures, but to no avail. Local authorities also failed to find a solution.

Serafini Ripanti was speaking as dozens of people with a chain around their wrists stood outside her cafe, holding banners against the looming closure. Her staff rewarded them offering free coffee and croissants.

The Antico Caffe della Pace is located just off Piazza Navona, a tourist hotspot in central Rome. The owners of the building hosting it - an Austro-German Catholic foundation - are said to be planning to turn the premises into a luxury hotel.

"This is what people say. They also say that renovation works will start on January 6: the front gate of the building next door is open, and they have already started bringing in construction equipment," Serafini Ripanti said.

The Pontifical Institute of Santa Maria dell'Anima has always refused to comment on its plans.

Once recognizable by its ivy-covered facade - now covered in scaffolding - and still displaying its outdoor tables and its old-school interior mixing Art Deco, baroque and neoclassical styles, the Antico Caffe della Pace has been in business since 1891.

La Dolce Vita director Federico Fellini, Pope John Paul II and scores of Italian painters, poets and writers have been among its patrons, and Rome-set Woody Allen and Julia Roberts films have been shot on its premises.

The cafe's future has been in jeopardy since 2011, when its rental agreement expired. Serafini Ripanti said her family repeatedly tried to renegotiate an extension, but claimed that the Pontifical Institute was never interested.