People in Paris aged 11 and over are now required to wear the masks in crowded areas and tourists hotspots.

INTERNATIONAL NEWS - Face masks became compulsory in tourist hotspots in Paris on Monday amid warnings of a resurgence of coronavirus cases, as infections in the world's worst-hit country the United States topped five million.

The requirement came as France along with much of Western Europe sweltered in a heatwave, with temperatures soaring above 35 degrees Celsius (95 F).

The blistering heat sent crowds flocking to beaches at the weekend despite health warnings about the risk of infection.

In Berlin, thousands of children returned to school on Monday after the summer break, sporting masks which are compulsory in common areas like school courtyards. Schools in some other German regions also reopened, though with differing rules on masks.

"No child forgot their masks this morning, so we see everything is back to normal," said Domenica Acri, headmistress of the Carl Orff primary school in Berlin.

In Pakistan, all restaurants and parks were allowed to reopen Monday, as well theatres, cinemas and public transport, after the country saw a drop in new cases for several weeks.

'Anything but second lockdown'
People in Paris aged 11 and over are now required to wear the masks in crowded areas and tourists hotspots. 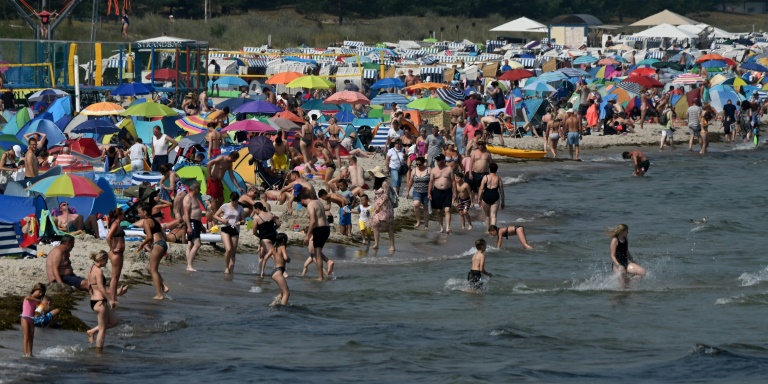 Crowds flocked to beaches in Germany and elsewhere in western Europe despite health warnings about the risk of infection.

These include the banks of the Seine River and more than a 100 streets in the French capital, including tourist destinations like Montmartre, where the Sacre Coeur basilica is located.

Several French towns and cities have already introduced similar measures, as well as parts of Belgium, the Netherlands, Romania and Spain.

"All the indicators show that since mid-July the virus is again circulating more actively in the (Paris) region," said a police statement at the weekend.

"I think it's a very good idea, we should maybe have done it sooner," Bertrand, 28, said in the popular Rue des Martyrs in central Paris.

"Since we don't understand enough about this illness, the best thing is that we protect ourselves."

The masks are "restrictive" but necessary "if we want to avoid a second wave in Paris," said Marion, 24, wearing a bright green mask. "Anything except a second lockdown." 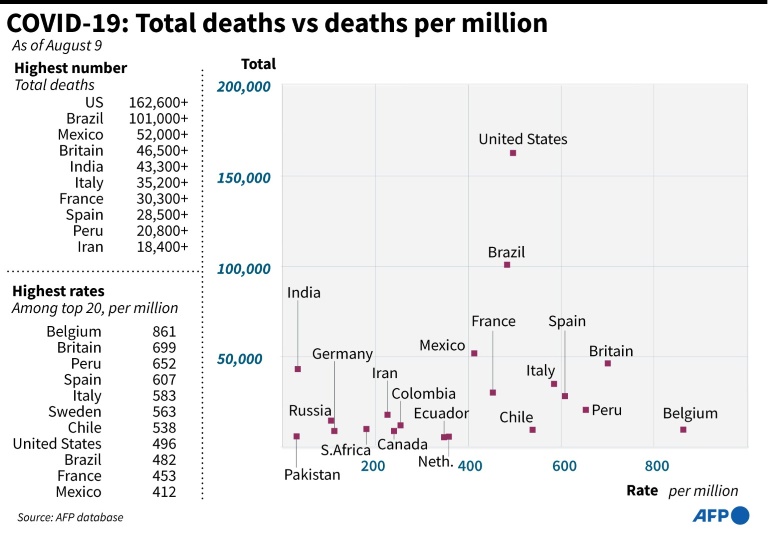 The death toll is at least 731,500 worldwide since the novel coronavirus emerged in China last December, according to a running tally from official sources compiled by AFP.

The United States is by far the worst-hit country with nearly 163,000 deaths. On Sunday, it reached the extraordinary milestone of five million coronavirus cases, according to according to John Hopkins University.

President Donald Trump's Democratic opponent in the presidential election, Joe Biden, tweeted that five million coronavirus cases was "a number that boggles the mind and breaks the heart."

'Unworkable, weak' relief
The figures came as Trump was accused of flouting the constitution by unilaterally extending a virus relief package. 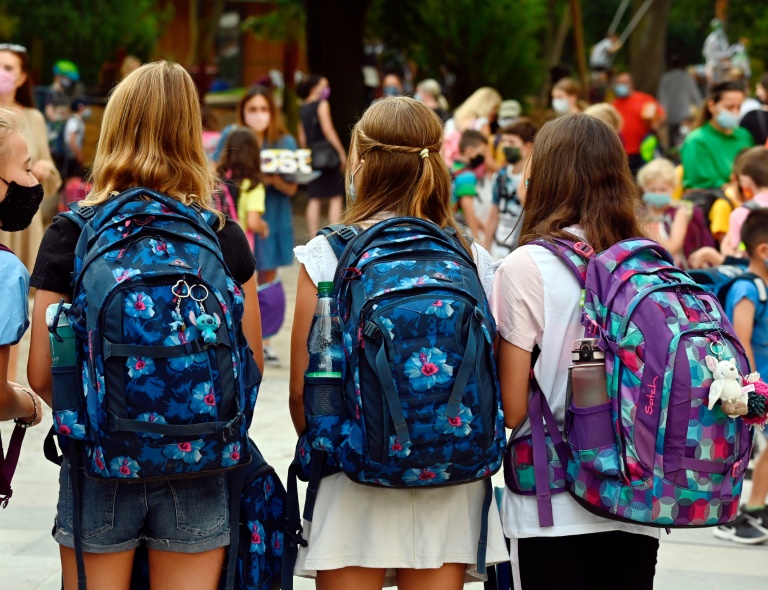 Schools resumed after the summer break in Berlin and several other German states.

The package - announced by Trump on Saturday after talks between Republican and Democrat lawmakers hit a wall - was "absurdly unconstitutional," senior Democrat Nancy Pelosi told CNN.

But with the world's largest economy still struggling to dig itself out of an enormous hole, Democrats appeared skittish about any legal challenge to a relief package they see as seriously inadequate. 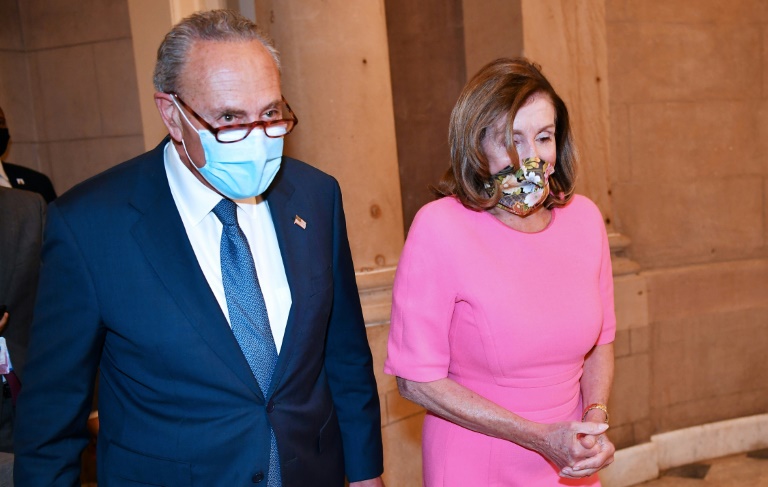 Schumer (L) and Pelosi have dismissed Trump's unilateral extension of a virus relief package.
The four executive orders Trump signed Saturday at his golf club in Bedminster, New Jersey will, among other things, defer payroll taxes and provide some temporary unemployment benefits.
The president was seen as keen to show himself taking decisive action ahead of a November 3 election that could see him ousted from office, with polls showing a large majority of voters unhappy with his handling of the crisis.
Grim milestone for BrazilAfter the US, Brazil has the most cases, and on Saturday it became the second country to pass 100,000 fatalities.President Jair Bolsonaro has played down the coronavirus from the beginning, dismissing it as a "little flu," questioning the lockdowns ordered by some state governors and saying their economic impact could be "more deadly than the virus." 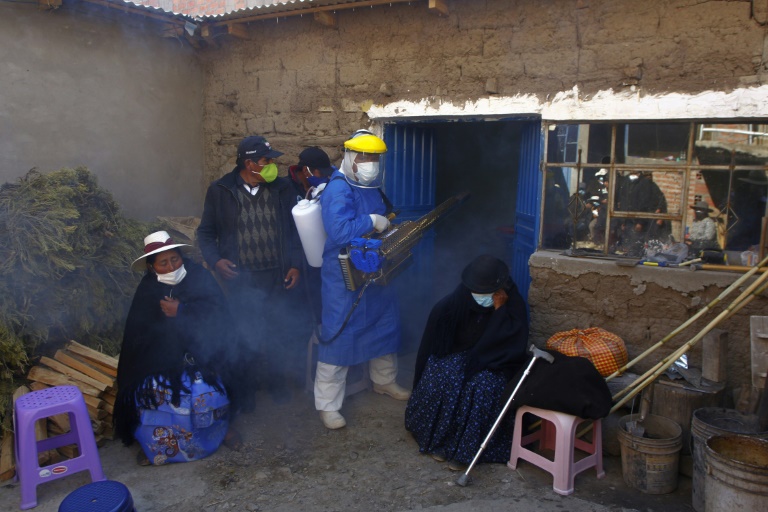 A funerary employee in protective gear disinfects the home of a COVID-19 victim as relatives mourn outside, in the remote Aymara highland village of Acora in Peru.

Following the news of the latest milestone, Brazil's most widely viewed TV network Globo criticised Bolsonaro's handling of the crisis, asking "Has the president of the republic done his duty?"

In Peru, indigenous people armed with spears and angry over what they consider government neglect of their communities in the pandemic assaulted a settlement for oil workers deep in the Amazon, triggering a clash with police that left three natives dead, the government said Sunday.

It was not revealed whether the two positive cases involved players or backroom staff.

Atletico said UEFA as well as the Spanish and Portuguese football and health authorities have been informed and that a fresh round of tests will be carried out on the squad and support team.