It took his group of experts and volunteers several journeys into the vast, arid grasslands of Kazakhstan before they found the calving ground where a herd of critically endangered antelope had congregated for birthing.

Kazakhstan's saiga antelope population has bounced back in the last two years.

INTERNATIONAL NEWS - Dropping to his knees to weigh a spindly-legged newborn saiga antelope, conservationist Albert Salemgareyev finds himself in the midst of the Kazakh steppe's most important baby boom.

It took his group of experts and volunteers several journeys into the vast, arid grasslands of Kazakhstan before they found the calving ground where a herd of critically endangered antelope had congregated for birthing.

Only several years earlier, a nasal bacteria had swept through populations of the animal, more than halving the global total and spurring disturbing images of carcasses strewn across the steppes.

But now it is bouncing back, with authorities hailing protective measures for a creature that survived the Ice Age, only to flirt with extinction several times in the modern era.

"You feel excitement but you are also worried you might hurt this tiny creature that just came into the world," said Salemgareyev, cradling one of the newborns, who were quickly finding their running feet.

The latest aerial surveys of saiga populations in Kazakhstan - where the vast majority of the species is concentrated - showed a growth from 334,000 to 842,000 individuals in the last two years. 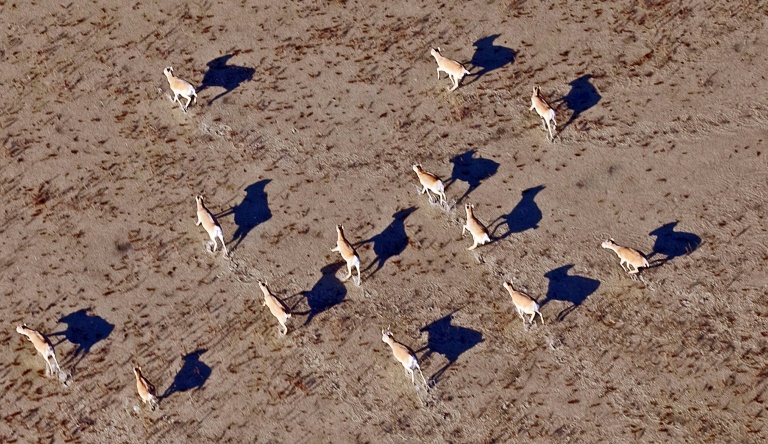 Having survived the Ice Age, the saiga antelope has come close to extinction several times in the modern era.

The calving is a particularly critical time for the animal when taking into account that the 2015 die-off happened at precisely this time during unusually humid weather.

Now the Association for the Conservation of Biodiversity of Kazakhstan (ACBK) where Salemgareyev works is seeing encouraging signs throughout its monitoring of the species, including an increase in the proportion of males, whose horns are highly prized in Chinese medicine.

If five years ago the male to female ratio was as low as one to 18, recent monitoring of herds suggested a ratio closer to "one to seven, or one to eight," Salemgareyev told AFP.

Kazakhstan's ecology ministry last week called the population boom "an indicator of the effectiveness of measures to conserve saiga populations and counteract poaching".

But despite stronger legislation and enforcement, poaching remains a threat, while others such as climate change and giant infrastructure projects loom on the horizon of the flatlands that are home to the antelope.

It is the saiga's bulbous, protruding nose, the beginnings of which are visible even on its bug-eyed, soft-featured babies, which marks it out as an animal from another time.

But the expansion of poaching at the turn of the 20th century tested the animal's famous talent for survival.

Around the time of the Bolshevik revolution, the global population had dwindled to the thousands. 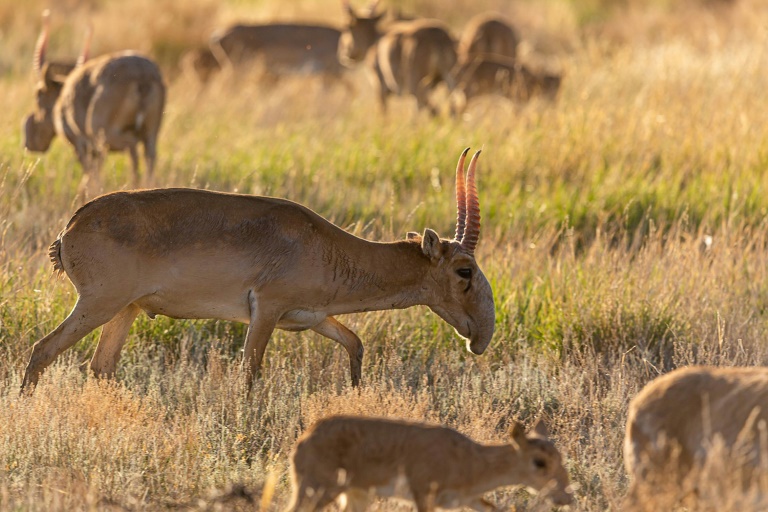 Despite stronger legislation and enforcement, poaching remains a threat.

The Soviet period offered unprecedented protections, first in the form of a three-decade hunting ban and later through strictly enforced quotas that helped push the population up to around two million.

But in the decade after Kazakhstan's independence, madcap poaching fuelled by booming demand for the horn in next-door China again brought the animals to the brink.

Recent years have seen the government crack down on the practice, toughening legislation and tightening enforcement.

In 2019, after two state rangers were killed by saiga poachers, the maximum prison term for poaching was increased from five to 12 years.

In a testimony to the strength of public sentiment over the murders, one of the two rangers, Yerlan Nurgaliyev, was honoured with a mural on an apartment building in Kazakhstan's largest city, Almaty, in which he is depicted cuddling a saiga. 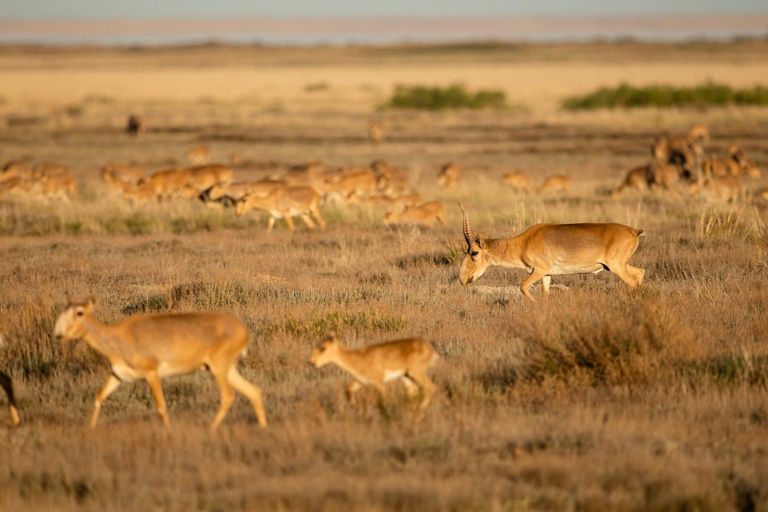 The horns of the male saiga antelope are highly prized in Chinese medicine.

The murders marked a turning point as "society began to train its attention on poaching", with media also covering the problem more, according to Fariza Adilbekova, who serves as national coordinator for the Altyn Dala conservation project at ACBK.

While Adilbekova praised tougher anti-poaching measures, as well as the government's recent decision to create a new national park in the west of the country, she said that new state infrastructure projects can threaten the saiga.

One is a planned 1,300-kilometre (800-mile) highway through pristine steppe and semi-desert in central and western Kazakhstan, cutting across saiga migration routes and potentially causing "disruption and distress" for the species, she said.

The die-off of 2015 hints at how other long-term, human-driven events could impact the saiga, meanwhile.

A team of scientists that conducted postmortems of antelopes that died in that calving season said in 2018 that the deaths had coincided with excess humidity and higher-than-average daily temperatures on the steppes.

These conditions may have turned a bacterium previously present in the saiga into a mass killer, the scientists argued in the journal Science Advances.

That finding means "concern going forward, given that a climate change-induced increase in temperature is projected for the region over the short to medium term," the authors wrote at the time.