Death toll rises to 50 from blasts near Afghan girls school

No group has so far claimed the attack, but Afghan officials including President Ashraf Ghani blamed the Taliban.

The attack on a girls' school in Kabul was the deadliest in more than a year.

INTERNATIONAL NEWS - The death toll from bombs planted outside a girls' school in an area of the Afghan capital populated largely by Shiite Hazaras rose to 50 Sunday as the Taliban denied government accusations that they were behind the bloody attack.

The Saturday's blasts - the deadliest in more than a year - rocked the west Kabul district of Dasht-e-Barchi, a regular target of Sunni Islamist militants.

It comes as the United States military continues to pull out its last 2,500 troops from the violence-wracked country despite faltering peace efforts between the Taliban and Afghan government to end a decades-long war.

He said more than 100 people were wounded, adding that most of the victims were female students.

Residents were out shopping ahead of this week's Eid al-Fitr, which marks the end of Ramadan, the Muslim holy month of fasting.

On Sunday relatives began burying the dead at a hilltop site known as "Martyrs Cemetery".

No group has so far claimed the attack, but Afghan officials including President Ashraf Ghani blamed the Taliban.

"This savage group does not have the power to confront security forces on the battlefield, and instead targets with brutality and barbarism public facilities and the girls' school," Ghani said in a statement after the blasts.

The insurgents have denied involvement and insist they have not carried out attacks in Kabul since February last year, when they signed a deal with the United States that paved the way for peace talks and withdrawal of the remaining US troops.

But the group has clashed in near-daily battles with Afghan forces in the rugged countryside even as the US military reduces its presence. 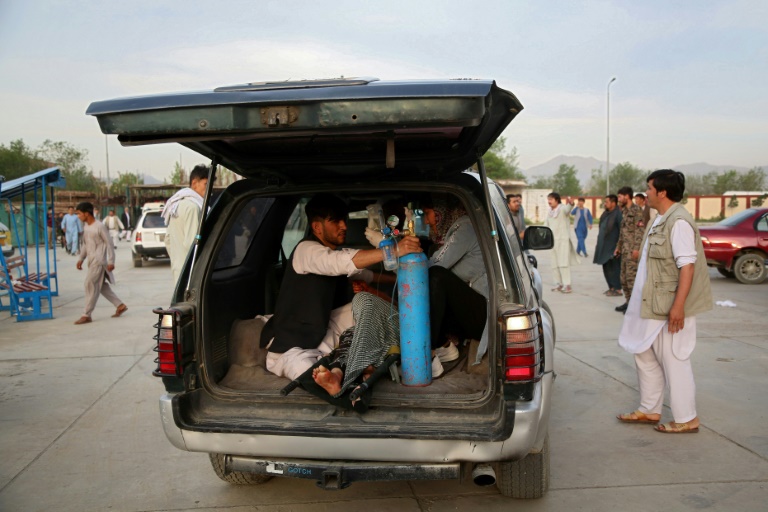 A wounded man is brought to hospital following the bomb attack. Afghan officials including President Ashraf Ghani blamed the Taliban although the insurgents denied responsibility.

The United States was supposed to have pulled all forces out by May 1 under a deal struck with the Taliban last year, but Washington pushed back the date to September 11 - a move that angered the insurgents.

"This unforgivable attack on children is an assault on Afghanistan's future, which cannot stand," Wilson said on Twitter.

The Dasht-e-Barchi neighbourhood has been a regular target of attacks from Sunni Islamist militants.

In May last year, a group of gunmen attacked a hospital in the area in a brazen daylight raid that left 25 people dead, including 16 mothers of newborn babies.

On October 24, a suicide bomber blew himself up at a tuition centre in the same district, killing 18 people in an attack that also went unclaimed.