"Today we lost Bob Hawke, a great Australian - many would say the greatest Australian of the post-war era," his second wife Blanche d'Alpuget said in a statement.

"He died peacefully at home."

The son of a preacher, Hawke led his country during the 1980s, a period during which he seduced the nation with his everyman appeal while beginning deregulation of the economy, including floating the dollar.

From negotiating with Frank Sinatra to ensure the crooner's 1974 Sydney concerts went ahead to shedding tears over bloodshed in Beijing's Tiananmen Square, Hawke was a huge presence on Australia's political landscape.

Never voted out by the public, which forgave him his faults, he won four elections on the run beginning in 1983, and only left office following a party room coup.

To many he was a quintessential Australian "larrikin" - a beloved rogue.

His death comes days before Australians go to the polls.

The Labor party posted a tribute on Twitter to one of their most fondly-remembered characters. 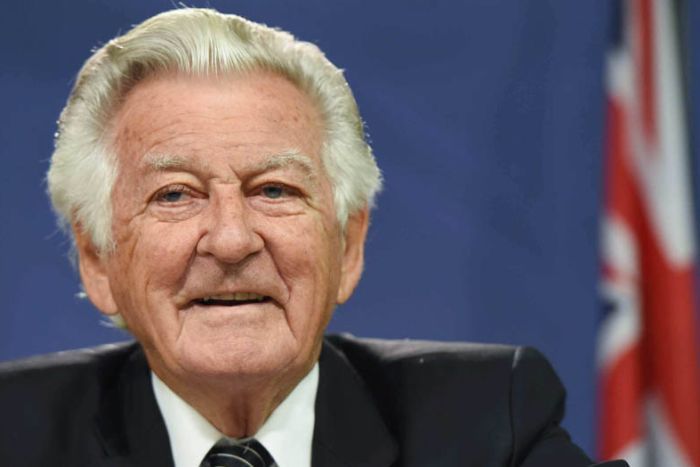 His death comes days before Australians go to the polls.

"Vale Bob. We will remember him. In solidarity, forever. May he rest in peace."

"When you would go out campaigning with Bob you were... absolutely mobbed," recalled Hawke cabinet member Susan Ryan.

"He was extremely popular with the women voters. They really, really liked to get near him and to touch him and to get him to sign the autographs and so forth.

"And the men liked him too because he was a sportsman and he had been a very effective trade union leader. So he was certainly Mr. Popularity."

When Australia won the America's Cup yacht race in 1983, a jubilant Hawke sporting a white blazer printed with the words 'Australia', memorably said: "Any boss who sacks a worker for not turning up today is a bum."

Nonetheless, he helped forge a consensus between labour unions and business, and used his appeal to win broad support for economic reforms which sometimes saw critics accuse him of moving the Labor Party to the right.

Robert James Lee Hawke was born on December 9, 1929 in Bordertown in South Australia, the younger of two sons. After his brother Neil died from meningitis in his teens, the family moved to Perth in Western Australia.

The grief-stricken parents devoted themselves to their younger son, who went on to become a Rhodes scholar at Oxford.

Recounting a terrible motorcycle accident as a 17-year-old, which resulted in a ruptured spleen and nearly killed him, Hawke said he felt he had been given a second chance at life and drove himself even harder to achieve.

On his return from Oxford he married Hazel Masterson, and devoted himself to the Australian Council of Trade Unions.

Hawke's first attempt to enter parliament in 1963 failed and he did not try again for 17 years. By the time he won the seat of Wills in Melbourne, he was a senior figure in the Australian Labor Party.

Because of questions about his reported womanising and drinking - which earned him a world record for drinking a yard-glass of beer, about three pints, in the fastest time - he gave up the booze.

Except, that is, for his tradition in his final years of chugging a beer on camera at sporting events to raucous cheers.

"I knew that if I was going to go into parliament I could never afford to be in a position where I could do something stupid as a result of having too much to drink which would bring disgrace upon me and on my country," he told broadcaster ABC in 2014.

Less than three years after entering parliament he was Labor's opposition leader and a month later was elected prime minister in the party's greatest victory in 40 years. He went on to win elections in 1984, 1987 and 1990.

Cultivating a mindset of consensus rather than confrontation, Hawke's government opened the nation's economy to global competition and 'floated' the Australian dollar.

Direct controls on Australian interest rates were removed, tariffs designed to protect Australian industry were reduced and foreign competition in banking was allowed.

While Hawke won the 1983 election convincingly, the following year he suffered the devastating blow of learning that one of his daughters was a heroin addict, giving a tearful press conference in which he said prime ministers were still husbands and fathers.

"People say he was a typical Australian man but in many respects he wasn't," said Ryan.

"He never had any inhibition about expressing his feelings, so if something was very sad or distressing he would cry in public and be quite at ease with it. And people accepted that."

As the recession of the early 1990s took hold, Hawke lost the Labor leadership in a party room coup to Paul Keating in December 1991.

He quit parliament two months later and involved himself in business, particularly as a consultant in China, where he was said to have laid the foundation for the current robust economic relationship between Beijing and Canberra.

Leaving politics allowed him to resume his love of alcohol, and he became known for downing a beer in one go at the cricket ground in Sydney each year, usually shown on the stadium's big screen to huge cheers and broadcast around the country.

In 1995 he divorced Hazel, with whom he had four children, and married mistress Blanche d'Alpuget.

It was one of the most talked-about scandals in Australian political history.

Asked how she would cope without him in an interview in early 2018, d'Alpuget said: "With difficulty. He's my best friend."