Alive with the sound of music 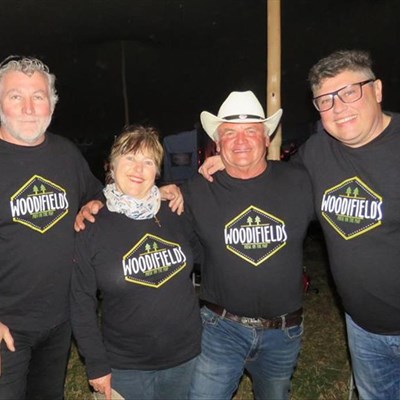 The organisers and owner of Woodifields want to host a repeat performance of Saturday's event in December. From left are organiser Alewijn Dippenaar, Colleen Perhatt, owner Bruce Jackson and Neil Els, a kingpin in Oudtshoorn tourism.

GEORGE NEWS - Woodifields proved to be an ideal setting for the Music on the Map festival as families and music fans enjoyed the relaxed atmosphere on Saturday 1 September.

Local bands played a wide variety of music ranging from country to hard rock and, to everybody's surprise, some bagpipe music was performed by The Bag Pipes to Scotland.

Farm owner Bruce Jackson said he is pleased to carry forth the tradition of hospitality by opening the farm's gates to the public on Saturday.

According to organiser Alewijn Dippenaar, it was a coming together of a fine plan to provide a platform for local musicians.

They hope to repeat the festival in December.

The only thing that could be improved is the time of the main show. It was a long wait from 14:00 in the afternoon to see Mel Botes and Co in action after 21:00.

Saturday's star attraction was Mel Botes and Co, who performed with musicians from Plettenberg Bay, where he currently lives. Mel (centre) hugs his drummer son Mel Junior (left) and Jacques Lourens stands by.

He began on a mellow note with Al lê die berge nog so blou and warmed up with Pink Floyd and the Beatles. Hopefully the audience will be less laid-back next time around and dance to the vibe. The Bag Pipes to Scotland provided an element of "everything goes" at the Woodifields Music on the Map festival.

Sitting under a starry sky, listening to vibrant music played by talented local bands is quite magical - especially when the moon disappears behind a cloud.

Not far from the venue lies the oxwagon tracks of trekkers who used Woodifields as an overnight stop before crossing the Kaaimans River.

The farm was then known as Pampoenkraal. Perhaps the people of yesteryear would have approved of the celebration of benevolence and people making merry. As the sun set over Woodifields farm, a mellowness settled in. Farm owner Bruce Jackson (left) with Henru Pienaar, Jessica Jackson and Gypseyman. The VW Kombi carrying the sound equipment was restored by Henru, a restorer and musician.

Read a previous article: Alive with the sound of music!