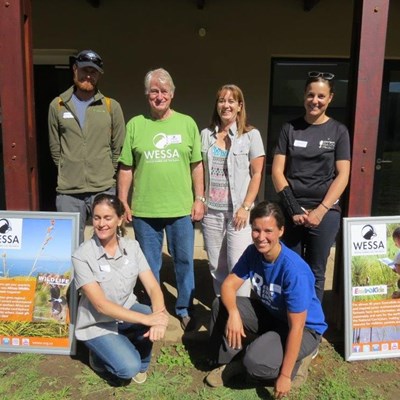 Some forward thinking young people involved in saving the environment by joining Wessa are from the back, left: Mathew Zylstra, Claude Marechal (Chair Wessa George), Susan Gie (Chair Wessa Western Cape and Citizen Science Project leader) and Louw Claassen. In front are Renata Harper and Janet Botes.
GEORGE NEWS - Wessa (Wildlife and Environmental Society of SA) Western Cape, which incorporates the Southern Cape region, held their annual regional representatives meeting at the Garden Route Botanical Garden in George on Saturday 25 March.
WESSA Eden hosted the event, which started with early morning guided walks in the garden. After the birding, biodiversity, botanical and historical waterways walks, the delegates gathered in the garden's new Environmental Education Centre. Delegates came from as far afield as Durban, PE and Cape Town to network and be brought up to date on membership matters.
The delegates were captivated by several reports from office bearers of the Western Cape Regional Committee and the local branches (Eden and Knysna-Plettenberg Bay). A fascinating presentation by Louw Claassens on the Knysna Seahorse (Hippocampus Capensis), the subject of her PhD thesis, revealed how these rare, endemic and threatened little creatures have survived the onslaught of man, and have benefited from the Thesen Island housing development. Lorna Watt told them of the expansion of the Brenton Blue Trust which has gone national to save endangered butterflies in other regions.
John Green, who joined Wessa when he was eight years old and is now approaching his eighties, took the delegates down memory lane (90 years of Wessa), highlighting the roller coaster ride environmentalists have endured over the years. Lack of goodwill by the government, world economic recessions, rapidly increasing demand on natural resources, especially wildlife, certainly did not make it easy.
However, the determination of a few individuals kept the organisation on course. Years ago, the extermination of animals classed as vermin by government included caracal, leopard, crocodile, porcupine and any animal which threatened the livelihood of farmers.
The consequences of this ill-considered decision were devastating. It took a number of committed individuals to stand up against the authorities, convince them to change their environmental policies and allow representatives from environmental bodies to serve on public committees.
Members and volunteers
A number of younger people in the audience were a welcome fresh breeze among the usual "more advanced" members. Among these was Renata Harper, the Youth Coordinator Wessa Western Cape and editor of the lovely magazine Envirokids. Another young'un was Mathew Zylstra (ex Australian now resident in Plettenberg Bay) who, as a Conservation Ecologist, heads the Wild Land Studies, which is an NGO funded by an overseas entity that allows him to conduct various wildlife educational tours around the country.
Louw Claassens from Knysna, who awaits the results of her PhD on her research on the Knysna Seahorse, is the director of the Knysna Basin Project which looks after the well-being of the Knysna estuary.
A member of Wessa, Janet Botes, an artist and graphic designer, has recently moved to Wilderness from Cape Town and will be rejuvenating the Wessa Eden Committee. Sue Gie, chair of Wessa Western Cape Regional Committee, thanked all the organisers and delegates.
Wessa volunteers are the life-blood of the organisation, but unfortunately the lack of numbers remains a universal problem. Members of the public who are able to offer their skills and experience in economics, journalism, technology, botany or anything that will advance the cause of Wessa (caring for Earth) are encouraged to join the organisation. Membership fees are also vital for the financial survival of the organisation.
More information www.wessa.org.za or wessageorge@isat.co.za
Article by Ken Gie
'We bring you the latest George, Garden Route news'