Update on the coronavirus by Premier Alan Winde

Tomorrow we mark the start of 16 days of activism against violence against women and children. In the WC, we believe this should be important every day of the year, which is why we have adopted a 365 day approach to fighting gender-based violence.

The Western Cape has recorded additional 16 deaths, bringing the total number of COVID-19 related deaths in the province to 4546. We send our condolences to their loved ones at this time. 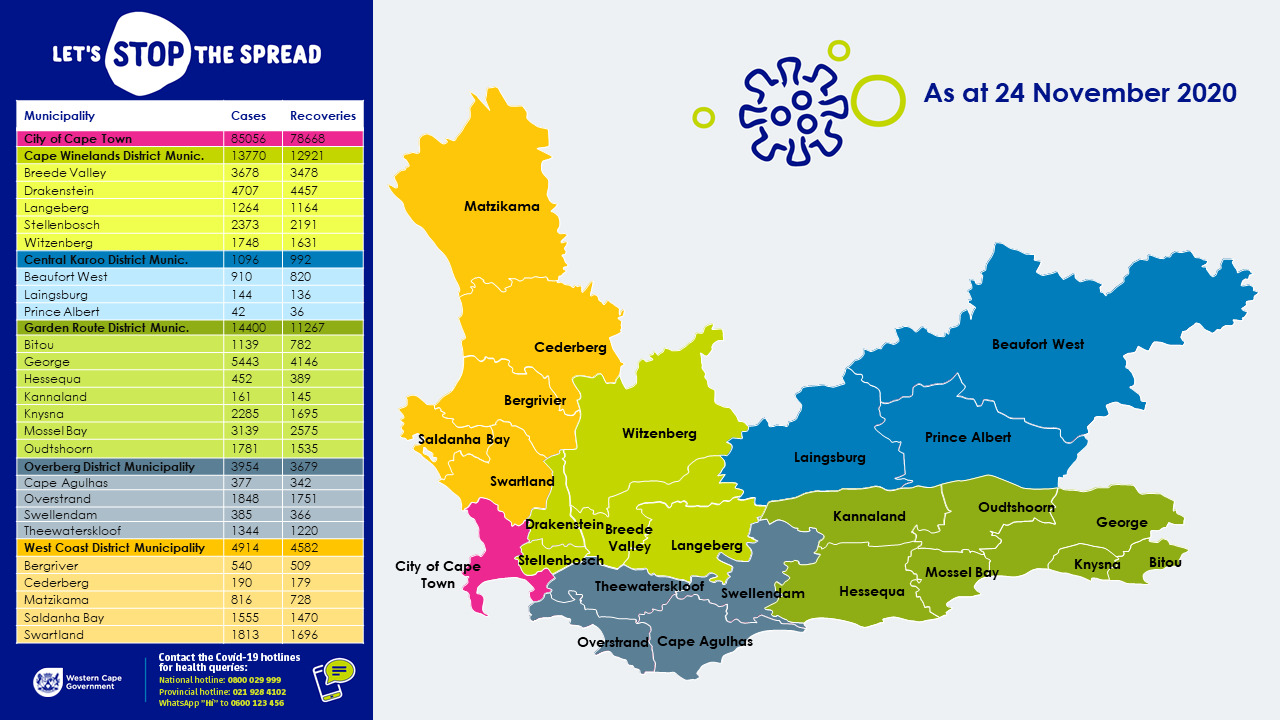 SAPS annual crime statistics show that in the 2019/20 financial year, over 43 000 contact crimes were committed against women and children in this province alone. This is unacceptable.

During the lockdown, we saw the overall number of crimes reported decline but we also know that around the world, many women and children were locked down with their abusers, unable to seek help. As the lockdown has eased, we have begun to see an increase in violence again.

We should all be having serious conversations about how we can be a part of the solution to this problem.

As a province, we have launched the Western Cape Safety Plan, which will increase visible policing and put in place violence prevention plans that target children, families and the root causes of violence in our society.

We are seriously pursuing changes to the provincial liquor legislation in order to specifically reduce alcohol related harms.

The Department of Social Development currently funds 20 shelters for women and children in the province, and 4 emergency shelters. Six more are on the cards once the property MOUs are finalised.

Our victim empowerment programme ensures victims are aware of their rights, that they have access to emotional and practical support, and that they are helped to manage their trauma.

We are also strengthening our after hours response teams with 30 additional GBV social workers to ensure that we have the right support available to victims late at night and on the weekends when help is needed the most.

The Department of Education has also included a number of programmes at educating learners about gender based violence, and protecting them while at school. Learners, staff and parents can also report gender-based violence, and all forms of abuse to the Safe Schools hotline (number listed below.)

This year, Western Cape Department of Community Safety tasked an official within the court watching brief unit to track the court progress of gender based and domestic violence cases through the justice system. Where cases are struck off the court roll due to policing inefficiencies, the unit assists in ensuring that they are reinstated and/or the necessary disciplinary action is taken.

Between July and September, the court watching unit tracked 92 cases which were struck off the role due to police inefficiencies. Of this number, 66 were related to domestic violence, gender-based violence and femicide.

The Department of Community Safety also recently concluded its report on SAPS’ compliance with the Domestic Violence Act. This is an important part of the department's oversight role and the report found that 67% of VISPOL and 74% of detectives at the 20 stations with the highest domestic violence caseloads, had not undergone the 5 day DVA training course.

We must ensure that women and children who are victims of these crimes get access to the help they need and the justice they deserve.

• As men, we must never remain silent in the face of abuse and violence.

• As parents, we must raise our boys to respect girls and women.

• As neighbours, we must look out for the women and children in our communities.

• As a country, we must make women and children feel safe in the knowledge that if they report abuse, that their complaints will be taken seriously.

If you are experiencing domestic violence, or have been a victim of gender based violence, please report it to the police, seek help from the Department of Social Development or one of the amazing NGOs which provide an essential service to victims of violence.