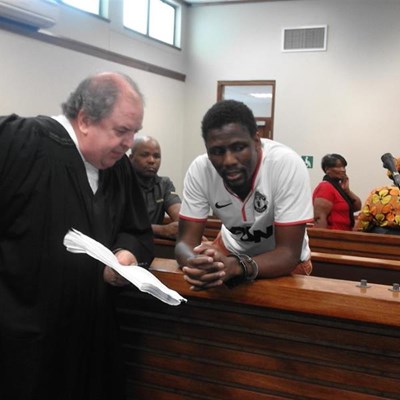 Zanemale Laho (right) with his legal representative, André Kleynhans. Photo: Zolani Sinxo
GEORGE NEWS - Zanemale Laho (33), from Thembalethu, was sentenced to 20 years imprisonment in the Circuit High Court this morning for the murder of Tom Queba.
On the theft charge (Queba's cellphone) Laho received an added 4 years. He also received 8 years for the illegal possession of a firearm and 6 years for the illegal possession of ammunition.
The sentences will run concurrently with the murder sentence.

Judge Roseni Allie said Laho was instrumental in the shooting of Queba, who was a pastor and local taxi owner. She said he is a danger to society as Queba’s murder is the second murder he has committed and was found guilty of over the past two-and-a-half years.