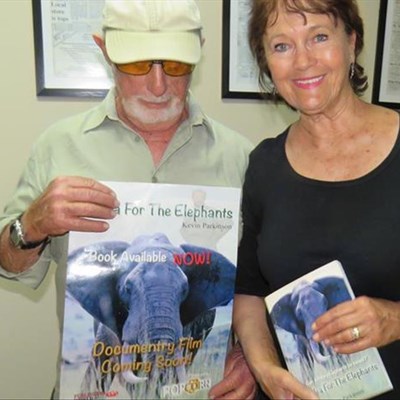 Kevin and Lynette Parkinson are launching their book, A Plea for the Elephants, on 21 and 22 November at Wordsworth Books in the Garden Route Mall. Photo: Pauline Lourens

SOUTHERN CAPE NEWS AND VIDEO - The world needs to be reminded that unless the $10 billion industry in ivory trading is halted, our African elephant population is headed for extinction.

Two passionate animal activists from the Southern Cape, Kevin and Lynette Parkinson, have made it their life mission to bring global attention to this industry.

The Parkinsons will be present at a book launch held at Wordsworth Books, Garden Route Mall on Tuesday and Wednesday, 21 and 22 November to promote his book A Plea for the Elephants. They expect to be at Wordsworth from 09:00 to 16:00 on these dates.

The profit generated from this book will be donated to elephant conservation.

Documentary
Kevin features in a short YouTube documentary in which an Okavango farmer describes how he witnessed poachers shooting elephants with AK47s one evening in 2016, returning later to hunt down and slaughter the remaining elephants.

Elephants are regarded as being as sensitive as humans and are said to mourn the loss of their loved ones as intensely as people do. Kevin hopes the hard-hitting film, produced by the SA company Grey Cloud Productions, will educate and raise awareness of the total onslaught on these magnificent animals.

The trade in ivory continues unabated - despite new restrictions being imposed in the USA. "African elephants are headed for extinction," says Kevin.

"Approximately 350 000 are left, with poachers slaughtering up to 30 000 a year; the bulk of ivory going to China and Vietnam. The death rate exceeds the birth rate. Our message needs to go worldwide. People have to be educated about the plight of Africa's elephants."