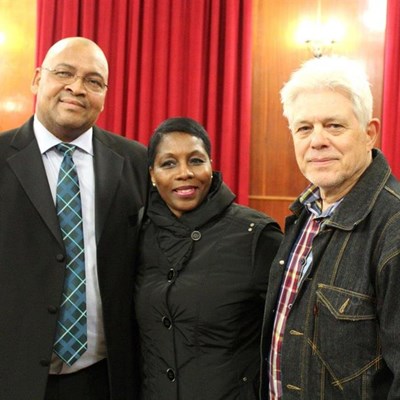 From left: Charles Standers, Ayanda Dlodlo and Piet van der Hoven.
GEORGE NEWS & VIDEO - On Wednesday 3 August, former George DA Mayor Charles Standers, will vote for the ANC. He made this announcement at a media briefing in the George Banquet Hall this morning.
Although Standers made it clear that he is not joining any party at this stage, he is openly canvassing for the ANC. “I am at peace when I call on voters to vote for the ANC,” he said.
According to Standers, ANC Mayoral Candidate Piet van der Hoven, is the only person running for election that can lead the town in a proper way.
Van der Hoven welcomed Charles Standers’s endorsement of the ANC. “His eyes have opened and we welcome him, he is now a new born.”
ANC National Deputy Minister of Public Service and Administration Ayanda Dlodlo congratulated Standers with his decision and confirmed that the ANC is very pleased to have him on their side. She has been deployed to the Southern Cape to boost the ANC’s election campaign.
Although Standers is not a candidate for the ANC, nothing prevents the ANC to include him on their proportional candidate list the day after the election. And as Standers has pledged his support to the ANC very publicly and has been enthusiastically welcomed into the ANC fold, this may be his only hope of keeping his political career alive.
DA Regional Head Jaco Londt said although the ANC denies it, the DA has reliably been informed that the ANC will definitely include Standers on their PR-list.
Watch a video below.
ARTICLE, VIDEO & PHOTO: MICHELLE PIENAAR, GEORGE HERALD JOURNALIST
'We bring you the latest George, Garden Route news'