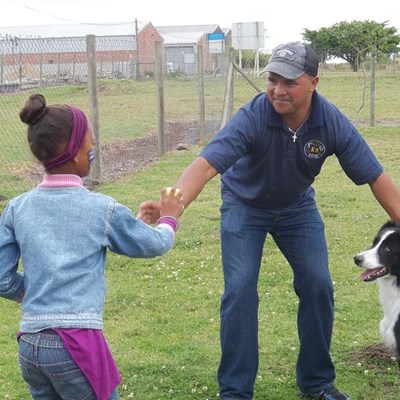 Mickayla Wyngaard is chosen to throw a ball for Oscar, Warrant Officer Kallie Heynes' collie, at the SPCA Family Fun Day.
GEORGE NEWS - The George SPCA International Animal Week celebration was opened with a fascinating lecture and demonstration by celebrity animal behaviourist Karis Nafte who gave the audience a mesmerising display of how to communicate with dogs.

The second day was the Family Fun Day, which was enjoyed by all family members, and the third was a moving animal blessing at St Mark's Cathedral.

Karis' top 10 tips on how to have a two-way 'conversation' with your dog had the spectators both laughing and taking notes as she and 6-month-old black Russian terrier Hemingway showed what works and what does not when trying to get your pooch to understand you. Despite Hemingway's youth, he was able to understand exactly what Karis wanted him to do without any pulling, yelling or threats - a few well-timed dog pellets from his daily allotment was all it took to get him to 'play ball'. The SPCA website and Facebook page will soon reveal the 10 secrets to those unfortunate enough to have missed this amazing demonstration. Visit https://www.facebook.com/GRSPCA.

Family Fun Day on Saturday had everyone holding their breath as the weather tried to dampen everyone's spirits but luckily the rain held back. The public was given a tour of the facilities by the SPCA staff and there were activities galore for the children and adults alike.
The dog demonstration, done by Johlene Lenaers, who trains with the Garden Route Dog Club, produced an energetic agility display with both experienced and new dogs that riveted the crowd. She was followed by a serious but entertaining SA Police Dog Unit demonstration led by Lieutenant-Colonel C Kritzinger. Warrant Officers K Heynes and M Fourie showed-off their dogs' abilities in smelling out body fluids and specific human scents. The children especially loved the demonstration by Ziggy K9 and Lt-Col Kritzinger who apprehended the 'criminal', Warrant Officer Heynes, who tried to 'steal' a bag Ziggy was guarding.

Heather Church, chairlady of the Garden Route SPCA Management Committee, gave thanks to Johlene, the SA Police Dog Unit, the York High SPCA Cadets, all the SPCA staff and volunteers and the public who helped make this year's Family Fun Day a success.

"It is great to be part of such a wonderful team," said Heather, who added that she hoped for a substantial turnout for the SPCA Animal Week's final celebration - the 'Bark in the Park', which is a mass dog walk and fun dog show to be held at the Caledon Street Botanical Garden this Saturday 12 October from 08:00 with the dog walk beginning at 09:00. For more information please call 044 878 1990.