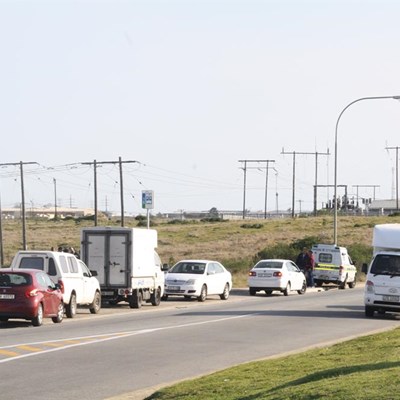 The scene in PW Botha Boulevard on Tuesday afternoon. No arrests have yet been made. Photos: Lizette da Silva
GEORGE NEWS - Another armed robbery took place in George this week (Tuesday 11 August) when four men in a black Golf 4 robbed a young Somalian man of R155 000 in cash in PW Botha Boulevard.
The victim's Kia truck had broken down after he experienced problems with his brakes, causing him to pull off the road. Shortly thereafter, the suspects stopped alongside him in the older model Golf 4, with no number plates, and threatened him with a firearm. The suspects grabbed the cash and drove off.
Several other Somalian citizens and members from the Conville Police were on the scene on Tuesday afternoon when the George Herald arrived. The victim, who was visibly in shock, said when the suspects jumped out, one of the men stuck the firearm in his side and took the money.
The victim was on his way to buy goods for one of the shops.
Suspect arrested in shooting
Also on the scene was Somalian shop owner Omar Mohamed Baris (33), who was shot outside his home in Willie Schaap Street on Sunday 2 August at around 19:30. Baris was shot in the stomach and taken to George Hospital. He was released on Sunday.
A suspect has been arrested in connection with the shooting and appeared in court this week.
Police earlier said Baris noticed an unknown man standing outside his home when he got out of his car. The suspect fired two shots, one of which hit Baris in the stomach. The suspect fled the scene on foot.
Read a previous news flash: R155 000 in gewapende rooftog gesteel
Omar Baris (right), who was shot at his home on 2 August, was also on the scene in PW Botha Boulevard on Tuesday afternoon after four armed men robbed a young Somalian man (green hoodie) who was on his way to buy goods for a shop.
ARTICLE: LIZETTE DA SILVA, GEORGE HERALD NEWS EDITOR
'We bring you the latest George, Garden Route news'