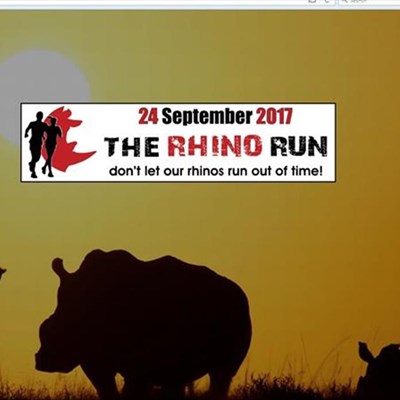 The national Rhino Run project was started six years ago by Sian O'Keeffe after he was touched by the plight of two poaching victims at the Kariega Game Reserve close to his home city, Port Elizabeth.

SOUTHERN CAPE NEWS - The second Rhino Run to be hosted in George will take place at ArendsRus Country Lodge in Geelhoutboom on 24 September.

The national Rhino Run project was started six years ago by Sian O'Keeffe after he was touched by the plight of two poaching victims at the Kariega Game Reserve close to his home city, Port Elizabeth.

This incident became famous as the plight of Thandi and Themba (Xhosa words for Love and Hope), the two survivors, spread around the world. Three rhinos' horns were hacked off using crude bush machetes and axes.

One died on the day of the incident, Themba sadly succumbed to its injuries a few weeks later, and only Thandi survived. "It was when I saw these poor animals come round and start to move, to discover half of their face had been crudely and barbarically hacked off, that I realised I could no longer sit on the sidelines to such horrendous acts of cruelty," said O'Keeffe. "With Thandi surviving the ordeal, her amazing story of survival and courage inspired me to start the Rhino Run."

The purpose of the project is to raise awareness of and funds for the war on rhino poaching.

George race organiser Cornelius Conradie said, "People can also make a contribution to this fund or they can just have fun with us on this day. I managed to get sponsors again for some lucky draws, but will really appreciate it if any business would come on board and make a difference."

The George race offers a 5km route and a 15km route. The first 100 entries will receive a limited edition Rhino Run buff. All race finishers will receive a Rhino Run medal. Parking and toilet facilities will be available at the venue.

'We bring you the latest Garden Route,  Hessequa, Karoo news'