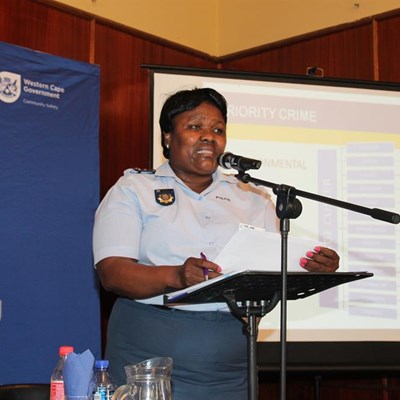 Brigadier Phindelwa Mavakala Photos: Myron Rabinowitz
GEORGE NEWS - "The police are constantly under pressure by communities to raid unlicensed liquor outlets and taverns so that these outlets can be closed down," said Brigadier Phindelwa Mavakala, station commander of the George Police Station, at a two-day provincial Policing Needs and Priorities (PNP) consultation workshop for the Eden Police Cluster in the George Civic Centre on 28 and 29 October.
"The problem the police have is that the liquor is stored on premises next to, or in the vicinity of, the illegal liquor outlet. The quantity of liquor stashed at each house is just below the limit of what is legal. It is no wonder we have difficulties finding sufficient stock that can be used for a successful prosecution when, in many cases, the complainant is working hand in glove with the illegal outlet," said Mavakala.
It seems that the complainants are scared to be identified as the whistle blowers and are often intimidated into keeping the excess liquor at their homes. To resounding cheers from Community Police Forum members, MEC for Community Safety Dan Plato told the workshop that the Western Cape Liquor Authority will be moved to his department in the next financial year.
"This will contribute to better control of the supply and regulation of alcohol in the province. There is a need to decrease the number of liquor outlets, especially in disadvantaged areas, as the link between alcohol and drug abuse and violence is just too great."
The aim of the PNP is to bring together various safety stakeholders for a workshop to develop a Community Safety Plan for each policing cluster.
ARTICLE AND PHOTO: MYRON RABINOWITZ, GEORGE HERALD - JOURNALIST
'We bring you the latest George, Garden Route news'