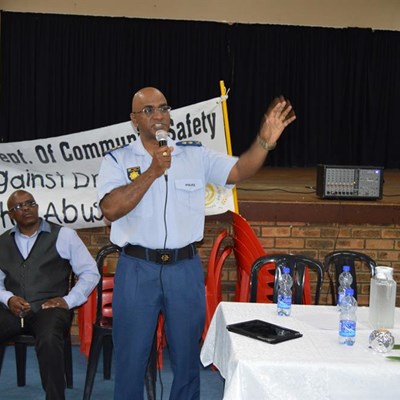 Major General Oswall Reddy (Eden police cluster commander) addressing the Thembalethu Community.
GEORGE NEWS - The Thembalethu police and the community police forum (CPF) kicked off their16 Days of Activism launch on Friday 25 at the Thembalethu Community Hall.
The 16 Days of Activism for No Violence Against Women and Children is an international awareness-raising campaign. It takes place every year from 25 November to 10 December. This period also includes the Universal Children's Day and World AIDS Day. The 2016 theme is "Count me in: Together moving a non-violent South Africa forward".
The objective of this campaign is to attract all South Africans to be active participants in the fight to eradicate violence against women and children. Expand accountability beyond the justice, crime prevention and security (JCPS) cluster to include all government clusters and provinces. The event was graced by the presence of different community stakeholders such as none government organisations and local political organisations.
Various entertainment groups such as the Imizamo Yethu High School choir and Remona Traditional Dance were also present at the launch.
Eden police cluster commander, Major General Oswall Reddy was also among the dignitaries who attended this event including the ANC sub-region chairman Langa Langa.
Different speakers advised the community and those who are victims of abuse to report such cases of violence against women and children to the relevant authorities and the police.
Remona Traditional Dance group entertaining guests.
'We bring you the latest George, Garden Route news'