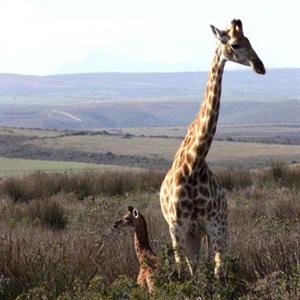 Baby Vuvuzela and Mom.
GARDEN ROUTE NEWS - When a baby giraffe was born at the Garden Route Game Lodge (GRGL) shortly before the start of the World Cup Semi Final between the Netherlands and Uruguay, the team at GRGL knew immediately that 'Vuvuzela' would be the perfect name!

"She's got a neck shaped like a vuvuzela" commented Madre du Plessis of GRGL, "and it happened in the middle of the World Cup in South Africa so we thought it would be a quite a suitable name".

The calf was first spotted on the sunset game drive by local field ranger, Etienne Froneman. One of his guests, a mrs Drotschie of Cape Town, asked why the adult giraffe cow was standing so awkwardly.

Froneman then climbed up on the bonnet of his landrover to get a better sighting only to see that the much anticipated baby giraffe had just been born. Newborn giraffes are about 1.8 m (6 ft) tall and can run around within a few hours of being born.