WESTERN CAPE NEWS - Western Cape residents must prepare for a bitterly cold weekend as an intense cold front is expected to reach the province by Friday afternoon.

Strong westerly to north-westerly winds (40 - 60 km/h) can be expected from the morning onwards over the entire Western Cape Province, ahead of the arrival of the cold front.

Gale force winds (60 - 75 km/h, gusting 80 - 100 km/h) can be expected on Friday along the coast between Table Bay and Plettenberg Bay and in places over the Central Karoo, Breede River Valley districts and Cape Peninsula.

According to the South African Weather Service, these strong, gusty winds may result in damage to settlements and infrastructure, transport routes and travel services being affected by falling trees, blowing dust as well as strong crosswinds, which could lead to longer travel times, as well as closure of susceptible and key routes.

The cold weather is set to continue until Tuesday.

Heavy rain
Showers are expected to set in over the Western Cape Province during the midday period on Friday, spreading inland and to the Southern Cape during the afternoon and evening. It is anticipated that the majority of rain will fall over the western parts of the province where 20 - 30 mm is expected on Friday, however rainfall in mountainous areas could peak as high as 40 - 50 mm.

Periods of heavy downpours may occur, which could lead to localised flooding.

Informal settlements on the Cape Flats and the Overberg District are likely to be amongst the areas most vulnerable to flooding. Snowfalls are also likely over the southern mountains of the Western Cape on Friday night to Saturday morning.

No fishing
High seas (exceeding 6 m) are expected to reach the south-western coastline of the Western Cape by Friday evening, spreading eastwards and reaching the southern coast, as far east as Port Elizabeth, by Saturday morning.

Commercial and subsistence fishing communities along the aforementioned coastline (especially the squid industry) are strongly urged not to venture out to sea on Friday evening, as sea (and wind) conditions are expected to deteriorate dramatically overnight into Saturday morning and afternoon, therefore posing a significant risk to life.

As the cold front shifts to the north eastern part of South Africa on Sunday, showers can be expected along the south eastern and eastern coastline, together with cold to very cold conditions over a large part of the interior of the country, where heavy frost can be expected Sunday night.

The following watches have been issued by the South African Weather Service:

In addition, there is also an advisory for very cold conditions (daytime temperatures less than 10 °C) over the southern Namaqua district, Northern Cape as well as the Cape Winelands and Central Karoo regions of the Western Cape on Saturday.

Figure 1: Projected wind speeds (in knots) over the Western Cape Interior and coastal regions for Friday afternoon as well as Saturday early morning. 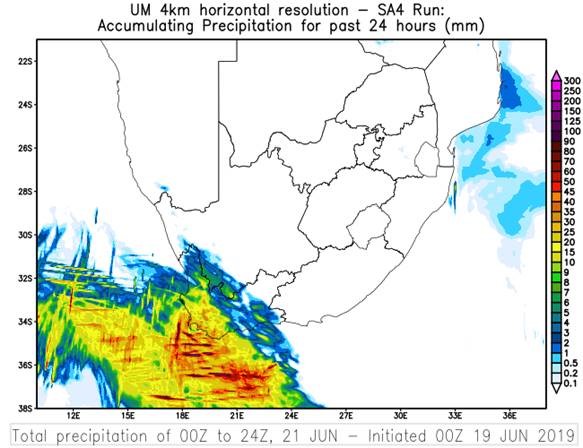 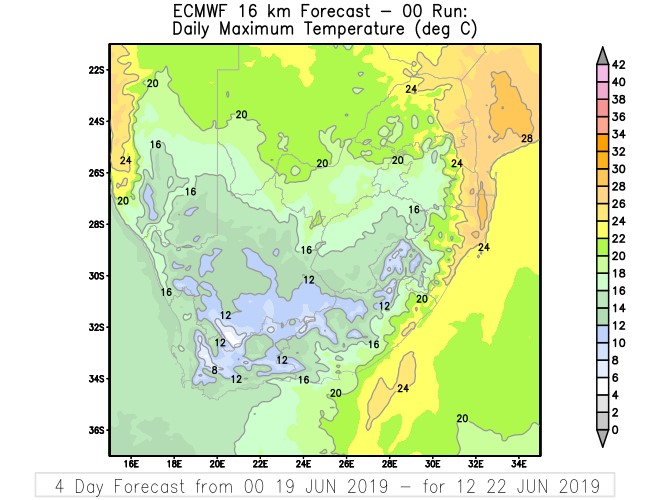