From chemical to flush in one month

Miggels is proud of his toilet and said he will make sure it's kept clean and maintained. "I've been a resident for 26 years in the settlement," he said. "These new toilets are definitely more convenient than the chemical toilets used previously."

At the freshly painted flush toilet are, from left: Cllr Marlene Barnardt; Mayor Leon van Wyk; one of the beneficiaries, Jonathan Miggels; and Raybin Figland, Portfolio Councillor for Human Settlements.

GEORGE NEWS & VIDEO - A resident of Kleinkrantz informal settlement, Jonathan Miggels, was so excited with a delivery of 24 flush toilets last week, that he almost immediately started to paint his new "throne".

The toilets, which are a positive change for residents who have used chemical toilets for many years, were officially handed over by George Mayor Leon van Wyk and a group of senior councillors last Wednesday, 10 March. The project ran from the end of January through February.

Miggels is proud of his toilet and said he will make sure it's kept clean and maintained. "I've been a resident for 26 years in the settlement," he said. "These new toilets are definitely more convenient than the chemical toilets used previously."

Claudine van Staden and her husband, William, who have lived in the Kleinkrantz informal settlement for 26 years, are equally pleased with the new addition. Claudine, who runs a soup kitchen in the settlement, said the flush toilets are more hygienic for her family and the rest of the residents.

Taps and toilets
There are 66 families living in the settlement. During the roll-out of the Informal Settlements master plan, a total of 24 chemical toilets and eight taps were provided to the residents.

The toilets were provided from grant funding on a ratio of one for every five structures while the ratio for the taps was one for every 25 structures, as prescribed by the National Department of Human Settlements.

The area where the settlement is situated is not level and the municipality had to move toilets closer to structures where the elderly or disabled people live.

Watch a video below of Jonathan Miggels and Mayor van Wyk speaking on new flush toilets:

From chemical to flush
The project was funded via George Municipality's budget for the upgrading of informal settlements, and Kleinkrantz was chosen due to the fact that water-borne toilets could easily be connected to the sewerage system at a minimal cost. Existing toilet structures, harvested from another project, were upgraded with new toilet pots and cisterns and used for this project, which further reduced the cost. An additional 12 taps were also provided to the settlement.

Edwin Herandien, Deputy Director: Human Settlements, said the service of 24 chemical toilets cost the municipality an astronomical amount of about R18 000 per month.

Better facility
Councillor Raybin Figland, Portfolio Councillor of Housing Settlements, said he is proud of the upgrade and that this is a step in the right direction, to restoring the dignity of residents. Ward Councillor for Kleinkrantz, Marlene Barnardt, said she and the residents can hardly contain their excitement with the new facilities and together with the residents, she has many plans to make the toilet facilities even more attractive.

Herandien confirmed that plastic doors were used for the facilities to deter vandals from breaking the doors. 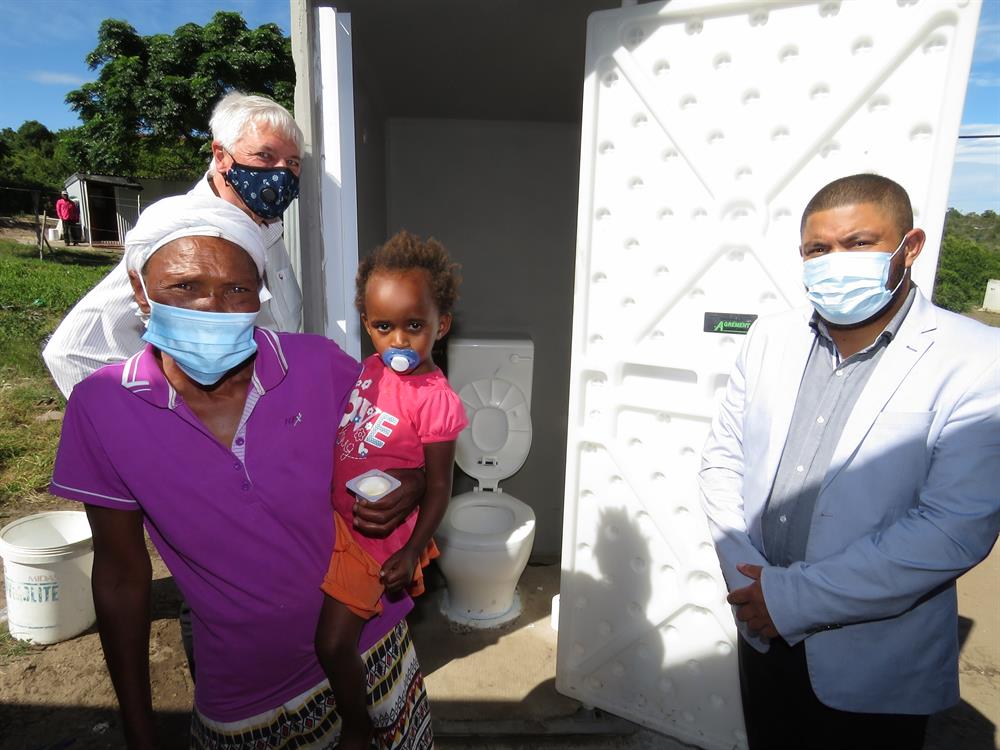 Hendriena Terblanche (50) has been living in the settlement for more than 30 years. Here she is with her grandchild, Lee-Ché Terblanche, at one of the new toilets. At the back is Mayor Leon van Wyk and to the right is Cllr Raybin Figland.