Fransman asks for unity in ANC 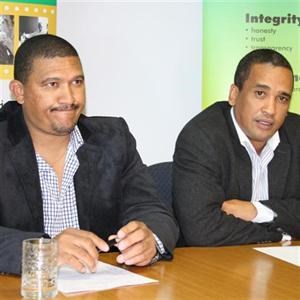 The new provincial chairman of the ANC, Marius Fransman (left) and Eden speaker Stephen de Vries at a news conference in George last year.
In spite of continuing in-fighting, the new Western Cape party structure of the ANC is putting up a united front.
The newly elected provincial chairman, Marius Fransman, says the ANC in the Western Cape is celebrating the triumph of hope over despair. "We have collectively resolved to do all that is necessary to rectify errors of our recent past by rebuilding the trust and confidence of our people in the African National Congress."

Fransman, the deputy minister of international relations and cooperation, was elected as chairman after Mcebisi Skwatsha pulled out of the election race. The Skwatsha camp is demanding that the election process be declared invalid. The new leadership was elected at the party’s seventh provincial conference attended by 719 delegates held at the weekend.
Fransman says the conference mandated the provincial executive committee to urgently develop a programme focusing on building unity. "The unity will be underpinned by a vigorous political drive to ensure we uproot the alien culture creeping into our glorious movement. In line with this we call on all ANC members to conduct them in a disciplined manner consistent with the ANC code of conduct. All members should use internal organisational process and refrain from undermining the integrity of the ANC."

Fransman says the new committee is drawn from the widest possible cross-section of the ANC in the Western Cape. "We are confident that this factor will be a formidable asset in the challenge to re-establish the ANC as a political home of choice for the electorate in this province."

Meanwhile the leadership in the Southern Cape is confident that the party will gain ground in the upcoming municipal elections and has also elected a new regional committee at their recent regional conference in George.
Brian Blaauw, LED and tourism manager at the Eden district municipality, has been elected as the new chairman whereas Putco Mapitiza stays on as regional secretary and Major Sokopo is the treasurer.

Despite their positive attitude, the local municipal race will not be an easy one. Apart from having to take on the DA, the local branches of the ANC will also have to take on a variety of other parties at the polls. A range of new political parties and other citizen forums, who abhor the title ‘political party’, have applied to register for the elections.

Most of these parties state that they want representation on council to effect real change for the people and to do away with party politics. Parties that have applied for registration include the Plaaslike Besorgde Inwoners, the South Cape Community Forum, the Tired of Promises Party, the Ou Pacaltsdorp Inwonersvereniging, the People’s Voice, the New Dawn Party and the George Onafhanklike Belastingbetalersforum.