Fracking: many hurdles to overcome 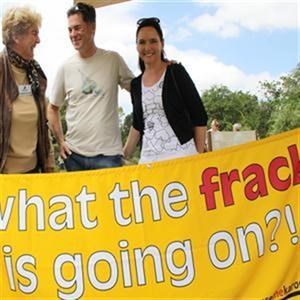 TKAG Chairman Jonathan Deal was in George in November last year during the Fynbos Eco Fest. With him are his wife Sharon (right) and Secretary Christine Schnaufer. Photo: Pauline Lourens
GEORGE NEWS - "Do not to rush into investment decisions around shale gas mining in South Africa," cautioned TKAG Chair, Jonathan Deal speaking at the Southern Africa Oil & Gas Summit in Cape Town. Deal said TKAG believes the fracking technology was wholly inappropriate for South African conditions, and that the applicants and the government would be challenged in the courts.

"Organised industry often accuses environmentalists of standing in the way of development and progress. But our view is that groups like TKAG perform a very valuable function in calling a check on what would otherwise be a headlong rush - into an irreversible decision - by governments eager to appease voters at any cost. I am not convinced that the economics of shale gas mining stack up in favour of the development. In fact I believe that the proponents of fracking have roundly failed to prove their case. In contrast to the stated result of helping SA exploring for shale gas in the Karoo it will add little of value compared to the risks of exposing SA unnecessarily to the same hazards and costs that the country would face in production."

According to Deal the hurdles that fracking proponents face include:
The fact that the task team report provided to the SA Cabinet by the Department of Minerals (DMR) as the basis for the Cabinet decision to lift the moratorium on shale gas mining, omits formal comment from South African specialists in, amongst other organisations, the departments of Tourism, Rural Development, Agriculture, Nature Conservation groups, Transport, South African Revenue Services and Health department. In the absence of scientific evaluation of and comment on these aspects, by South African specia-lists in the South African context, the document is a flawed model on which to base a decision on whether or not shale gas mining should be introduced to this country.

The SA government has an established inability to monitor mining operations, enforce standards of safety and technical compliance, and prosecute offending operators who can and do hire the best international defence with the comparatively vast funds at their disposal. In 2011/2012, the Departments of Water Affairs and Minerals respectively, acknowledged that there were 53 mines in SA operating without water licences and more than 5 800 abandoned mines which would have to be rehabilitated at the expense of the SA taxpayer. The bill to address an acid mine drainage problem in the town of Carolina has been budgeted at R200-million - again for the SA taxpayer.

Physicians and scientists in the United States have published reports relating to a variety of health concerns for communities and workers close to fracking operations and to those situated within reach of airborne and waterborne pollution. There has been no formal acknowledgement of these reports by our government, or by any of the current applicants who wait for their exploration licences.

A significant cost to the American taxpayer is the repair, upgrading, and maintenance of state roads as a result of the additional volume of heavy vehicles associated with shale gas mining. A group of six counties in Texas budgeted $500-million for the period 2011 to 2016. South African roads are already in a marked state of disrepair and barely manage to cope with existing traffic volumes. Law enforcement on SA roads cannot be counted as a strength of the Department of Transport, and even in the US, where the law enforcement agencies are better trained, better equipped and better paid, that country is battling to manage the additio-nal enforcement challenges presen-ted by traffic from shale gas mining.

There is no discussion of who will pay to build the pipelines and infrastructure to transport gas across SA.

The applicants and government have failed to acknowledge the bans, moratoria, and restrictions on shale gas mining in other places and countries.

South Africa does not have fracking specific legislation. American regulations based on American laws cannot be imported into SA courts.

The economic model commissioned, paid for and propagated by Shell and apparently endorsed by the government, fails to address even one cost. Shale gas is measured in decades. Sustainable activities, which, on the face of it, in a direct short-term comparison with shale gas, are less impressive. They ought to be measured for their long-term renewable potential. The jobs, production re-venue and food security value of vegetables, meat, wool, tourism, wine, olives, honey and even the value of fresh drinking water should be calculated in much longer periods than decades. A comparison on this basis may introduce much needed perspective. The present model is akin to planning a new business by calculating only the profit on sales, and ignoring input costs. In summary of these facts, it is my position that there are no quick fixes for South Africa. For our government to license exploration in the light of these unresolved issues, knowing and planning that it will open the door to full-scale production, is ill-considered and irresponsibly risks the sustainability of future generations.

A November 2012 report from Price Waterhouse Coopers shows that there is a clear indication that the pursuit of shale gas is going to delay the onset of renewable energy and green technologies, and lock developing nations into a dependence on fossil fuels.