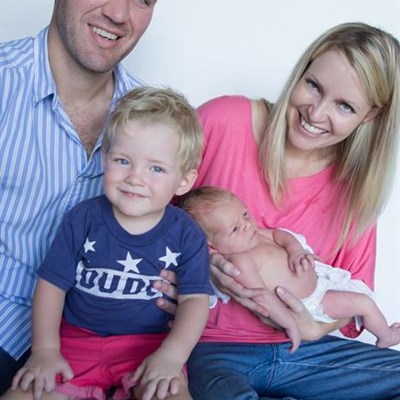 Carlo Botha, 2002 Outeniqua High matriculant, with his wife Louise and sons, Jandré (2) and Ruben (7 months).
GEORGE NEWS - Carlo Botha (32) is the type of guy who will play nine holes of golf with you on a Friday afternoon, cycle with the locals on Saturday morning, and join the die-hard Comrades runners on Sunday.
That comes after a board meeting in the week, signing off a new system implementation, and improving the bottom line, all while ensuring his wife and two young sons are cared for too.
This is how an ex-Kwagga (2002 matriculant) who has just been selected as one of the SA Institute of Chartered Accountants' Top 35-under-35 finalists is described on the Saica website.
Botha is the financial manager of Stellenbosch Vineyards, wine producer and exporter of wine to about 40 countries in the world. He joined the company in 2014 and is lauded for the way in which he, in the first week after arriving at Stellenbosch Vineyards, took leadership of the team that implemented a new enterprise resource planning (ERP) system successfully while achieving it 30% below the original budget.
According to the Saica website, "He has also been able to identify a number of key cost-saving opportunities and taken over the responsibility of foreign currency risk management along with revamping the insurance strategy and being a key member of the credit risk management committee."
Botha studied at Stellenbosch University before completing his clerkship at Baker Tilly Greenwoods in Cape Town. "Since then I have gained experience in various industries, from mining to hotel and tourism, and now also agriculture and wine production," he told the George Herald.
"It is a huge honour to be a finalist and to be part of this distinguished group of young CAs who are all making a difference in their field."
Botha is also involved with Amicus, an organisation formed in 2007 between friends of the Dagbreek residence at Stellenbosch University that financially supports children with special educational needs from previously disadvantaged backgrounds.
He is furthermore a keen sportsman who has represented South Africa at the World Duathlon Championship and is Vice-Chairman of the Sport Council of the University of the Western Cape.
"Sport is close to my heart and I would like to contribute and make a difference," said Botha, who is also a dedicated husband and father to two boys.
How does he fit everything into his schedule? "It is all about balance and time management as well as the amazing and wonderful support of my wife, Louise."
The winner among the Top 35-under-35 finalists will be announced on 29 September in Johannesburg.
ARTICLE: ALIDA DE BEER, GEORGE HERALD JOURNALIST
'We bring you the latest George, Garden Route news'