Evicted and no place to go 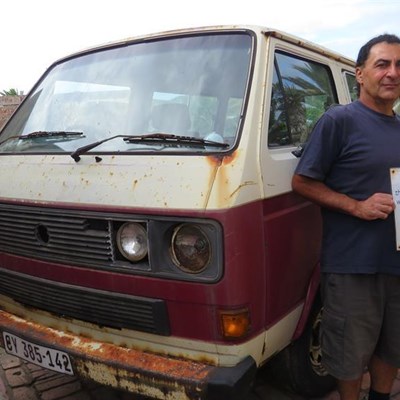 Manuel Jorge and his wife Stephania are living in their Kombi and neighbours are getting hot under the collar. The photo was taken shortly after their eviction. Photo: Pauline Lourens
GEORGE NEWS - A couple who have resorted to sleeping inside their Kombi in front of the Wilderness house from which they were evicted three weeks ago, are making waves.
The Wilderness Ratepayers Association has urged the George Municipality to do something about this "illegal squatting" that has been going on since 5 April. However, the municipality seems to be in a dilemma as there is a waiting list for homeless people.
Manuel Jorge and his wife, Stephania, say they are staying put to guard their possessions which they keep next to the road. George Sheriff workers put their possessions on the pavement on the day of eviction.
The couple's rented house burnt down on 11 August 2016 after a veld fire destroyed it and three other luxury homes. They then moved into a small two-room out-building on the premises.
Ample notice
Liezel van Niekerk, the George attorney acting on behalf of the pensioned homeowner, said the Jorges were fully aware that the lease had come to an end in September last year. She said the Jorges were given notice long before the fire and were given ample time to find alternative accommodation before steps were taken to obtain a legal eviction on 13 March this year.
But the Jorges claim that although they are following up leads to find suitable accommodation, none has been forthcoming. In the meantime, the SPCA is housing their two beloved dogs until they have a roof over their heads.
They said this week that if somebody could offer them an outbuilding or disused shed, for which they are prepared to do work, they would be very appreciative. Manuel says he is unable to put in a full day's work after suffering a stroke, and that his wife is asthmatic and in the early stages of emphysema. Their small confectionary supply business had to be closed as the confectionary became too expensive to import.
Third respondent
The three-week saga has put the George Municipality in a difficult position. The local authority was named as the third respondent in the eviction order (which serves as a notice that the evictees need accommodation). However, the municipality's assistant spokesperson Debra Sauer said: "The Jorges must go to our housing offices in order to determine if they meet the criteria for emergency housing, so that if there is a cancellation in an informal settlement we can try and accommodate them. Presently there are 80 erwen (that are already occupied) and there are more than 3000 families on the emergency housing list waiting their turn."
Following the fire the Jorges benefited from the kindheartedness of a fundraising initiative led by Shannon Smith from Wilderness when they received a cheque of nearly R35 000 at the end of October last year, but are once again in a desperate position. They ask anyone who can help restore normality to their lives to phone 072 452 0940.
ARTICLE: PAULINE LOURENS, GEORGE HERALD JOURNALIST
'We bring you the latest George, Garden Route news'