Elvis Blue hoping for a SA hit at US Open 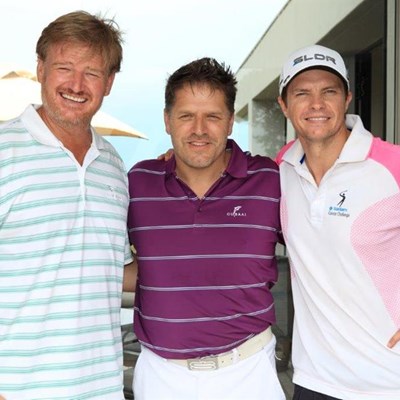 A day on the golf course. From left: Sanlam Cancer Challenge Ambassador Ernie Els, Sanlam Sponsorship Manager Gary van Loggerenberg and musician Elvis Blue during a round of golf at Oubaai Golf Estate.
GEORGE NEWS - As one of South Africa's top musicians who also happens to swing a golf club once in a while, Elvis Blue will be watching this week's US Open with interest and in the hope that Branden Grace makes his Major breakthrough at Oakmont.
"Obviously I'm supporting all our boys. Branden Grace came so close last year and then hit that shot onto the train tracks. I'd love to see him go all the way," says Blue, who since taking up golf fairly recently admits he's become addicted to the game.
"I have a serious addiction to golf on TV. I find myself not sleeping for days on end."
While dominating the South African music industry with several award-winning albums and singles, Blue has also found time to indulge his passion for golf and throw his support behind the annual Sanlam Cancer Challenge, the biggest charity golf tournament for the Cancer Association of South Africa (Cansa). Over 35 000 amateur golfers took part in the challenge in 2015, helping to raise more than R3 million for Cansa through the hundreds of club golf days around the country.
The winners of these club and regional finals were treated with a trip to Sun City to play the Gary Player Country Club and Lost City Golf Club courses. And they were also treated to a live performance from Blue, who lists his experience here as one of his best moments in the game.
"I was blown away when I saw the amount of money raised by the Sanlam Cancer Challenge. It's amazing that people having a good time playing golf can raise that much and make such a difference."
The combination of golf as a vehicle to support Cansa resonates with Blue. "My father-in-law has cancer so it definitely hits close to home. I don't know anyone who isn't touched by this in some way."
Back to this week's US Open, Blue has a pretty good track record of having performed for, or played with, two of the country's major champions. "After Charl (Schwartzel) won the Masters I got to perform for him. And I've been lucky enough to meet Ernie (Els) a few times. I've hit a very bad tee shot while Ernie was watching. It was embarrassing and exhilarating at the same time. My golf is getting much better. But you know, it's still golf."
Unaware that Gary Player once recorded a Country album, Blue says he could see potential in a collaboration with the Black Knight.
"I'm keen to collaborate with anyone as long as they help me with my golf swing."
'We bring you the latest George, Garden Route news'