The Garden Route is leading the Western Cape Province in the resurgence of Covid-19, with George having the highest number of active cases in the province.

A total of 35 deaths were recorded in the Garden Route during the past week, Tuesday 17 to Tuesday 24 November, and the number of deaths in the district now totals 458.

GARDEN ROUTE NEWS - Premier Alan Winde warned Garden Routers yesterday, Wednesday 25 November, that they are planning possible area-specific restrictions and a clampdown on people not adhering to Covid-19 regulations to curb the second wave of Covid-19 infections in the district.

Winde spoke during his weekly digicon, during which a Covid-19 update was provided.

He said moving over provincial borders, especially in the coming holiday season, will be discussed on Friday during a strategy meeting of the provincial Covid-19 management team. Right now there is no mechanism to close down a border, but tools for creating "a sort of a mini-lockdown or a closing down of a region" will be looked at.

"... my message to anybody in the Garden Route right now would be to limit themselves on movement and when we move or operate we must manage it through the golden rules."

The Garden Route is leading the Western Cape Province in the resurgence of Covid-19, with George having the highest number of active cases in the province. George and Knysna reported a record number of daily new cases on Monday and Tuesday, 23 and 24 November - higher than these two sub-districts ever recorded in one day. As of 24 November, George has 1 158 active cases.

Western Cape head of Health Dr Keith Cloete said in the face of the increase in infections, all possibilities will be explored to see what the appropriate application of restrictions would be. Travel during the holiday season between the Garden Route and Eastern Cape, where there has also been a resurgence of cases, will be part of their discussions.

The premier said many citizens are not taking the issue seriously enough and urged citizens to act responsibly, stick to the five golden rules, and try to keep large social gatherings and events to a minimum.

"You have to start planning your life a bit differently." He warned that tougher enforcement of Covid-19 regulations will be rolled out and businesses will face fines if they ignore the regulations. He stressed the need for economic recovery and avoiding a hard lockdown. 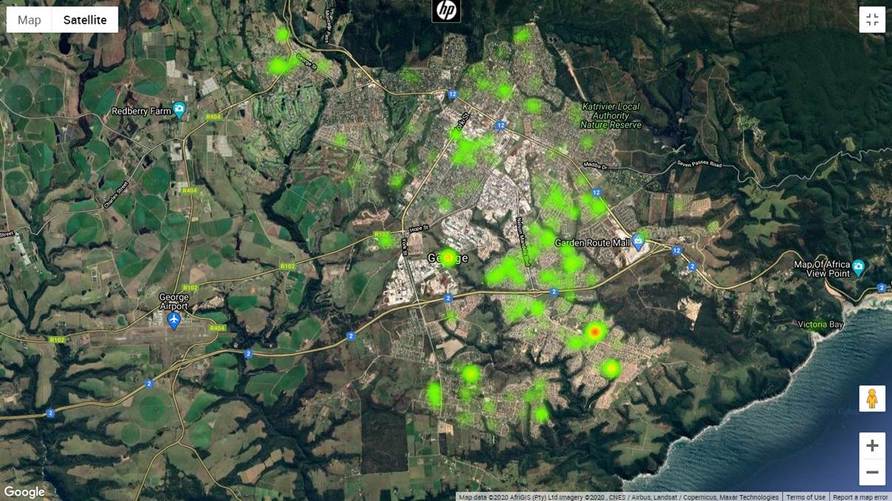 The Covid-19 hotspots as of 24 November.

Resurgence in province
The province is also experiencing a resurgence outside of the Garden Route. "If we remove the Garden Route from the figures, the provincial case numbers and hospitalisations are at the same levels of May 2020, indicating established resurgence in the whole of the Western Cape," said Cloete. "From 6 November there has been a steep increase of 52% in cases week on week."

The Garden Route and Cape Town metro are driving the increase. The proportion of positive tests in the province has increased from 6,8% in mid-September and is now 22% across the province.

There is also an increase in oxygen use and deaths.

"It is starting to be comparable to what we experienced in May when we were in the first wave. Our biggest concern is the number of healthcare workers testing positive recently."

Western Cape Disaster Management head Colin Deiner said the resources of the disaster management centres in the province are under stress and with the season lying ahead, they will have to prioritise the areas of focus and customise intervention for different areas. 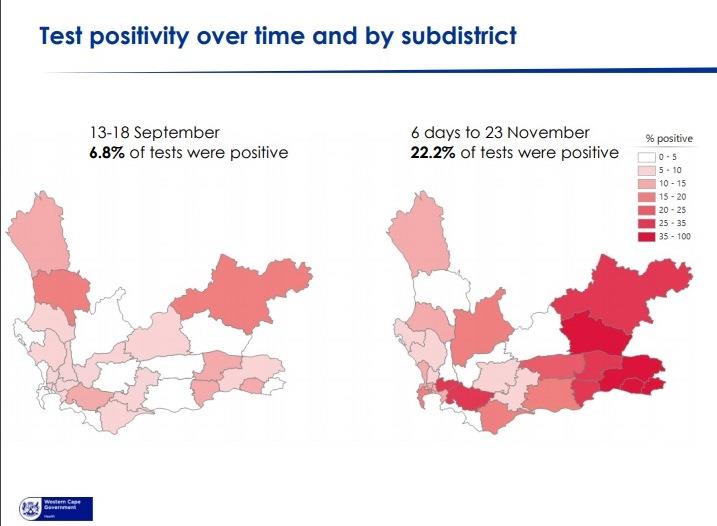 The test positivity rate of the province has increased dramatically.

Wider age group affected
According to Cloete, during October the most new cases were experienced in younger people in the age group 16-20 years, but for the last few weeks in the Garden Route, the same age group as affected in the first wave, 25-60, now makes up most of the people affected.

He said 20 000 tests are conducted weekly and they are starting to use antigen testing, which is faster. The latter will be deployed in the Garden Route too.

Death rate increasing
A total of 35 deaths were recorded in the Garden Route during the past week, Tuesday 17 to Tuesday 24 November, and the number of deaths in the district now totals 458.