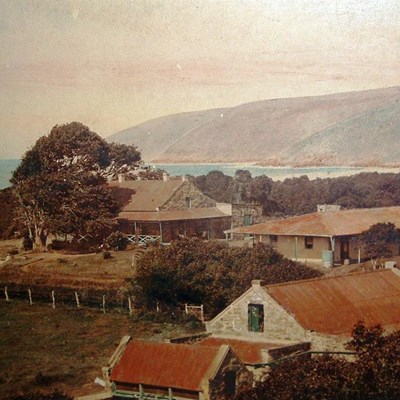 A photo of the Wilderness Homestead in 1910. The colour is believed to have been added by Monty himself.
GEORGE NEWS - One hundred years ago, in April 1916, Montagu White died from mushroom poisoning at his home, Fancourt.
The manner of his death and the place is still in the folk memory of many Georgians, but not much more remains. So who was Montagu White? How did he come to own Fancourt? And, especially, what brought about his macabre death?
Montagu White was the only son of Henry Fancourt White, builder of the Montagu Pass in the 1840s, and his wife, the widowed Sarah Bosworth. Henry White resigned from the Roads Board and in 1854 was elected as a member of the new Cape Parliament for Port Elizabeth. The couple married in England in 1856 and their son Ernest Montagu (Monty) White was born in Surbiton in 1857.
Humble beginnings
The family moved back to the Cape soon afterwards, but Henry could not find work, so they settled on the farm that he had bought at Blanco, the village that had been named after him. Here he built a home, 'Blanco House'.
The next few years were tough financially and Henry was in poor circumstances when he died in 1866, leaving a widow, her daughter from her first marriage, and nine-year-old Monty. By the time of his mother's death in 1875, Monty was 18 and already a magistrate's clerk in Willowmore.
Two years later in Komgha, he was involved in a skirmish in the 9th frontier war. Later, in 1886, he moved to the Transvaal, joined the civil service there and attracted sufficient notice to be appointed, in 1892, as the Transvaal's consul-general in London. He held the post until the outbreak of the Anglo-Boer War and was credited with doing "valuable service in keeping Pretoria informed of political developments".
A 'gentleman'
In March 1898 the then George & Knysna Herald reported that, "Mr Montagu White the Transvaal Agent-General in London, has been staying for some days in George, the place of his birth. He left last week for Cape Town. We do not believe that he was paid out of the Transvaal Secret Service Fund to spy out the nakedness of the land. Mr White is too much of a gentleman to betray his country for the sake of filthy Lucre."
That he was born in George was incorrect, but clearly there were rumours that Monty was on an information gathering mission.
Things moved fast after that. The Anglo-Boer War broke out the following year and Monty had to leave England, where he was liable to be treated as a traitor, having been born in England, but working for what was now an enemy state.
He moved to New York where he became involved in raising support for the Boer cause, and where he remained until July 1902. Interestingly, on his last day in the USA he lunched privately with President Teddy Roosevelt, then the most powerful politician in the country.
Return to George
Monty returned to the Southern Cape in 1903, in his mid-forties, and looked about for opportunities. One of his first acts was to buy his father's old home for £3 500, partially rebuilding it and naming it 'Fancourt'. It remains the heart of the hotel and golf estate of that name at Blanco.
Shortly afterwards he and others floated the Wilderness Estate Company, which bought the Wilderness from the Bennett family in May 1905 for the sum of £10 000. There he installed the Van Niekerk sisters to run the old Bennett Homestead as a guesthouse. There, too, he built White's Road with a view to providing a gentler gradient for the newly visiting motor cars.
Clearly his finances were in remarkably good shape for a man who had had a difficult start to a varied life. Surprisingly, in 1909, Monty, then aged 52, married Margaret Hesse, a wealthy spinster in her mid-seventies in England. Possibly because of her age, she did not want to move to Fancourt, so Monty spent the English summers with her, moving to his Fancourt home for the South African summer – an early 'swallow'.
For the love of mushrooms
Then in April 1916, tragedy struck at Fancourt. Monty was being visited by his half-sister, Mrs Ham, her friend, Mrs Sydney Vintcent, and Mrs Vintcent's young son. White collected field mushrooms for dinner and was delighted to find a new specimen he thought he recognised as one he had enjoyed in his Transvaal days.
The cook was doubtful about the mushroom. While she cooked it as instructed, she tested it by cooking it with two silver coins, a sixpence and a tickey (roughly 5c and 2,5c respectively). The result was inconclusive - one coin blackened, the other did not – so she followed her orders and served the dish.
Signs of poisoning appeared in the adults that night and within 48 hours all three adults were dead. There is an unanswered question as to whether young Vintcent disliked mushrooms or was too young to have been offered them. Monty was not yet 60 and his sudden death completely altered the course of events at Fancourt and Wilderness, both of which were sold.
He left no children and he and his sister lie buried in the grounds of St. Mary's, Blanco. To this day, in terms of his will, there is the Montagu White Bursary for overseas study available to art students.
ARTICLE: HUGO LEGGATT
'We bring you the latest George, Garden Route news'