Business conned out of stock worth R82 000 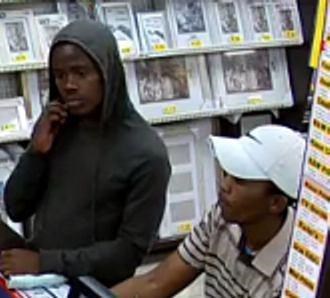 The man (left) who paid the cheque into ISP's bank account. This CCTV footage was taken at a shop in Mossel Bay from where the proof of payment was faxed. Photo: Supplied
GEORGE NEWS - Local events company ISP Group suffered a loss of more than R80 000 after a so-called client paid with a stolen cheque and disappeared with the stock.
Seeing little results from the police investigation, ISP has now called in the help of Michael Hills, a private investigator, to help them find the culprits.
According to Michelle Cawood-van Vuuren, a director at ISP, a lady by the name of Fiona Sipho Guwa called them on 10 June to place an order for stock worth R82 000 for an event in Mossel Bay. This included crockery, cutlery, pots, an urn, chairs, tablecloths etc.
"We told her to pay upfront, which she said was not a problem. On Friday 12 June the payment was still outstanding and we told her that we could not deliver without payment. She then said her boss was going to pay the cash into our account. In a follow-up call we told her that she could give the driver the cash on delivery and she replied that her boss had already deposited the cash."
Cawood-van Vuuren says later that same day she saw that a cheque to the amount of R5 839 for hiring the goods had been paid into their account. The driver then delivered the hired stock to Guwa at 5682 Dube Street, Asla Park in Mossel Bay.
Upon delivery, the driver was handed a copy of Guwa's ID and proof of payment.
The next Monday ISP called Guwa to collect the stock, but she asked them if she could keep it for the week because her uncle had died and she needed the stock for the funeral the following Saturday.
"We told her no and that afternoon when ISP arrived at Dube Street everything was gone, including Guwa. There were people there who said she was in another area, but they could not say where."
ISP opened a case of theft with the George Police on Wednesday 17 June. The company was also informed by their bank that the cheque that was paid into their account was stolen and that it would be reversed the following day.
Anyone with information regarding this case can contact the investigating officer, Detective Peterson, on 044 803 4768. Alternatively, contact Michael Hills on 082 377 2212.
ARTICLE: LIZETTE DA SILVA, GEORGE HERALD NEWS EDITOR
'We bring you the latest George, Garden Route news'