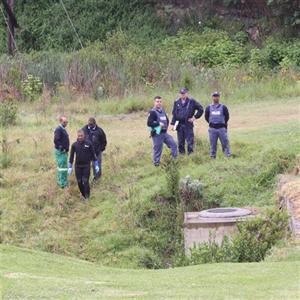 The body was found in the Rooi River. Photo: LeeAnne Pratt
GEORGE NEWS - The body of an unidentified man, believed to be in his 30s, was pulled from the Rooi River (in CJ Langenhoven Street) this morning by police divers.

According to police, the body has been in the river for a few days and was spotted by a passerby.

An investigation has been launched.