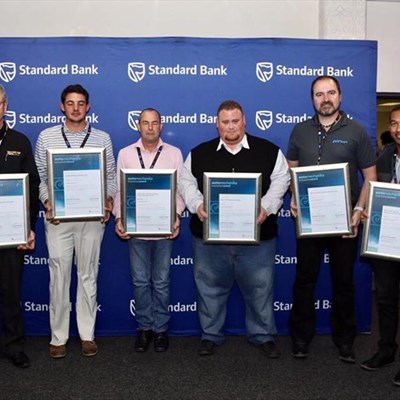 The winners with their awards.

Six products out of nearly two dozen that were entered were honoured for their innovative qualities following evaluation by a jury of automotive experts.

The awards were convened by Wynter Murdoch, editor of Automobil.

The competition was open to any recently introduced automotive products which the manufacturers or distributors deemed worthy of recognition.

The judges said the ability to quickly and accurately diagnose vehicle problems was integral to professional, high quality repair work - and the KTS represented an example of a state-of-the-art technical aid.

The unit is made in Germany and was introduced in South Africa in April.

The silver certificate went to Monroe's OE Spectrum shock absorber. It made its public debut at the trade fair.

"Monroe has responded with a shock absorber for the aftermarket which offers twice the usual number of internal tuning points to promote driving precision, agility and responsiveness.

"In this sense, the product helps to support road safety. What's more, it's backed by an extended five-year warranty," the jury commented.

The bronze award was won by Qwerty Tyre Solutions' Str8-Lign Wheel Alignment unit - a locally designed and manufactured portable system which the judges rated highly for the promise it showed in delivering cost-effective benefits for workshop and in-the-field applications.

Since April, it has been undergoing tests with vehicle manufacturers, wheel alignment specialists and industry bodies, among them Toyota Gazoo Racing, Thomas Tyres, SupaQuick and Tune-Tech BMW.

Highly Commended certificates were awarded to Gondolier, for its Walcom Carbonio 360 Spray Paint Gun, Jackhub, for its electronic vehicle jack and Wise Cracks, for its Apollo Windscreen repair kit.

The repair kit is manufactured in Port Elizabeth and was described by jury members as "very neat, compact and cleverly thought out."

Their view was that it would prove ideal for service providers who travel from customer to customer, while remaining equally handy for use in workshop applications.

The Walcom Spray Gun is manufactured in Italy.

It was judged to be well suited to a variety of panel shop applications thanks to its ergonomic design, light weight and robust construction.

The Jackhub electronic jack was described as likely to find favour among private motorists as well as industry professionals for its simple plug-in and jack-up system.

The awards were presented to representatives of each of the winning companies by Konstantin von Vieregge, CEO of Messe Frankfurt South Africa, organisers of Automechanika Johannesburg.