2 arrested for fraud at testing station 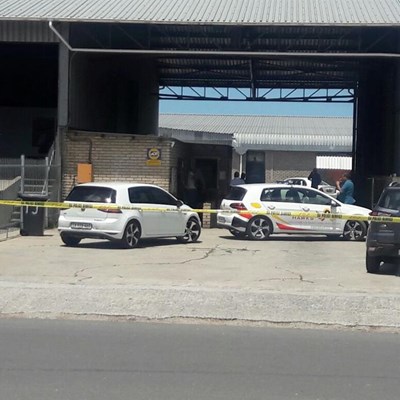 The Hawks on the premises of TJ Motor Vehicle Testing Station. Photo: Myron Rabinowitz.
GEORGE NEWS - The Directorate for Priority Crime Investigation (Hawks) swooped on the premises of TJ Motor Vehicle Testing Station, Laing Street, George Industria at 11:40 this morning (Tuesday 13 December) and arrested two males for alleged fraud.
The owner, Eugene Labuschagne told the George Herald at the scene that the Hawks arrested two of his employees.
He said he believes it is in connection with a vehicle that was on the premises in December 2015 and January 2016.
He said he would contact his attorney about the arrests.
Labuschagne said the Hawks were at his premises a month or two ago asking questions about a vehicle that was tested there in January. “We gave them all the information and they left.”
Labuschagne’s testing station made headlines in 2011 as the station had certified the Rheenendal school bus, in which 14 school children and the bus driver died on 24 August 2011, as roadworthy in April of that year.
Robin Carlisle, the then Western Cape Minister of Transport and Public Works, closed down the testing station shortly after the bus accident, but the station reopened when the Western Cape High Court overturned Carlisle’s decision to close it down.
Labuschagne would not comment on a possible link between the bus accident investigation and the arrests of today.
The George Herald received a tip off about the Hawks’ raid with the caller saying it is about alleged vehicle roadworthy certification fraud.
More information to follow as it becomes available.
ARTICLE: MYRON RABINOWITZ, GEORGE HERALD JOURNALIST
'We bring you the latest George, Garden Route news'