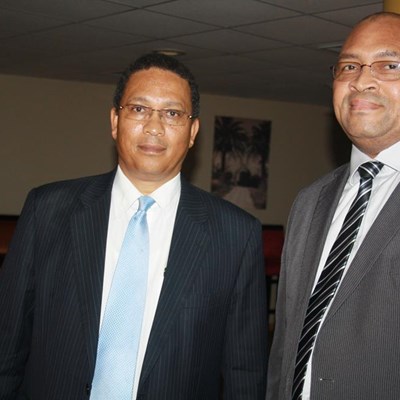 Western Cape Finance Minister Dr Ivan Meyer (left) with George Mayor Charles Standers during the minister's visit on Friday. Photo: Alida de Beer
GEORGE NEWS - Major infrastructure development in the education and transport sectors forms part of a R4,2-billion budget granted for Eden District for 2015/16 by the Western Cape Provincial Government.
The district will witness 11 new schools arise to provide in the increasing demand by a fast growing population in the region. This was revealed by Western Cape Finance MEC Dr Ivan Meyer during a visit to George on Friday, a day after delivering his provincial budget speech in Cape Town.
Meyer announced infrastructure spending on education, housing, health and transport totaling R1,43-billion in Eden with transport receiving a cut of R788,1-million, education R319-million, health R41,6-million and human settlements R279-million.
The biggest transport infrastructure project is a R28-million injection for road upgrades at Plettenberg Bay Airport.
A total of R40-million is to be spent on road infrastructure in the Stilbaai area, including the rehabilitation of the road linking the town with the N2. Blanco was allocated R22-million under the transport infrastructure spend and R26-million was set aside for the Glentana road upgrade that already started last year.
The health infrastructure budget includes allocations for health technology infrastructure at George Regional Hospital (R1,84-million), Mossel Bay District Hospital (R2,5-million) and Oudtshoorn District Hospital (R2-million).
Building will also start on the new Eden Nursing College in George at a cost of R6-million in the 2015/2016 book year and a further R15,3-million in the following two financial years.
11 new schools
George will be getting two new primary and two new secondary schools (in Thembalethu and Pacaltsdorp), Knysna will receive two primary schools and one secondary school, Hessequa and Mossel Bay will get a primary school each, and Bitou will get two primary schools.
For Oudtshoorn, one new primary school is in the planning stage and maintenance is scheduled for three primary and three secondary schools.
A new initiative is also to be launched in the region when the first Youth Café outside of the Cape Metropole opens for pupils in George where they become part of programmes are aimed at preparing them to become active role-players in the economy and not adults dependent on social grants.
Meyer also announced a shift in the education system from textbooks to e-learning where pupils will have access to information via Tablets. A massive rollout of broadband internet through free Wi-Fi hotspots, also in rural communities and for small businesses, will begin. Hotspots will be set up at 2 000 government buildings, including clinics and hospitals.
Another new concept to involve pupils in sport and cultural programmes in the afternoons after school will also be introduced. An allocation from the health budget has furthermore been made for the deworming of pupils in accordance with the Western Cape Government's promotion of a healthy lifestyle to curb health expenditure in the long-run.
Other major public works projects are the modernisation of the York Park building in George at a cost of R13,8-million and upgrading of House De Klerk Hostel in Mossel Bay for R16-million.
Migration from 'failed states'
Meyer compared neighbouring provinces to "failed states", which caused migration into the Western Cape that is considered "a safe harbour". This is having a significant effect on the demand for hospitals, housing and schools and puts extra strain on employment figures. "There is an enormous need for housing in the region. A total of R7,7-billion is to be spent on housing and related infrastructure in the region over the next three years," he said.
The number of citizens in Eden grew from 375 082 in 1996 to 574 265 in 2011 and the average 2,4% annual population growth rate is expected to continue with an estimated 613 124 people inhabiting the region by 2017.
Transport and Public Works Minister Donald Grant, who was part of the delegation from Cape Town, said that Eden holds big promise for the future, and the provincial government will make sure that the region receives the necessary support to succeed. The area has been identified as the next metropole outside of Cape Town.
ARTICLE: ALIDA DE BEER, GEORGE HERALD JOURNALIST
'We bring you the latest George, Garden Route news'