The consequences of keeping child support grants below the poverty line

Poor children who do not eat nutritious food every day find it hard to learn at school and end up in low-paying jobs, among other issues.

BUSINESS NEWS - Government’s decision to keep the base value of the child support grant below the poverty line, with an increase below inflation, risks putting mothers and caregivers in a worse position to secure a nutritious diet than in 2020, a survey has revealed.

Mothers and others who care for children find it even more difficult to secure a proper nutritious diet for their growing children, amid an ongoing pandemic and continued financial burdens.

This stark reality is demonstrated by the cost of the Household Food Basket survey in the May 2021 Household Affordability Index, conducted by the Pietermaritzburg Economic Justice and Dignity group.

The index tracks food price data from 44 supermarkets and 30 butcheries in Johannesburg, Durban, Cape Town, Pietermaritzburg and Springbok in the Northern Cape. The average cost of the basket decreased by R61,82 (-1,5%) from April to May 2021.

The group says the spikes in April 2021, where the average cost of the Household Food Basket increased by R159,37 (3,9%) in one month, have subsided, but the reduction of the basket in May of -R61,82 is still much less than the April increase.

The prices of meat, tomatoes, oranges and bananas contributed to the decrease in the basket price, but core foods such as maize meal, cake flour, sugar beans, samp, cooking oil, potatoes and onions continues to rise, albeit at a slower rate.

Core foods are bought first, and their price determines the money left to buy nutritionally-rich foods such as meat, dairy, eggs, vegetables and fruit. 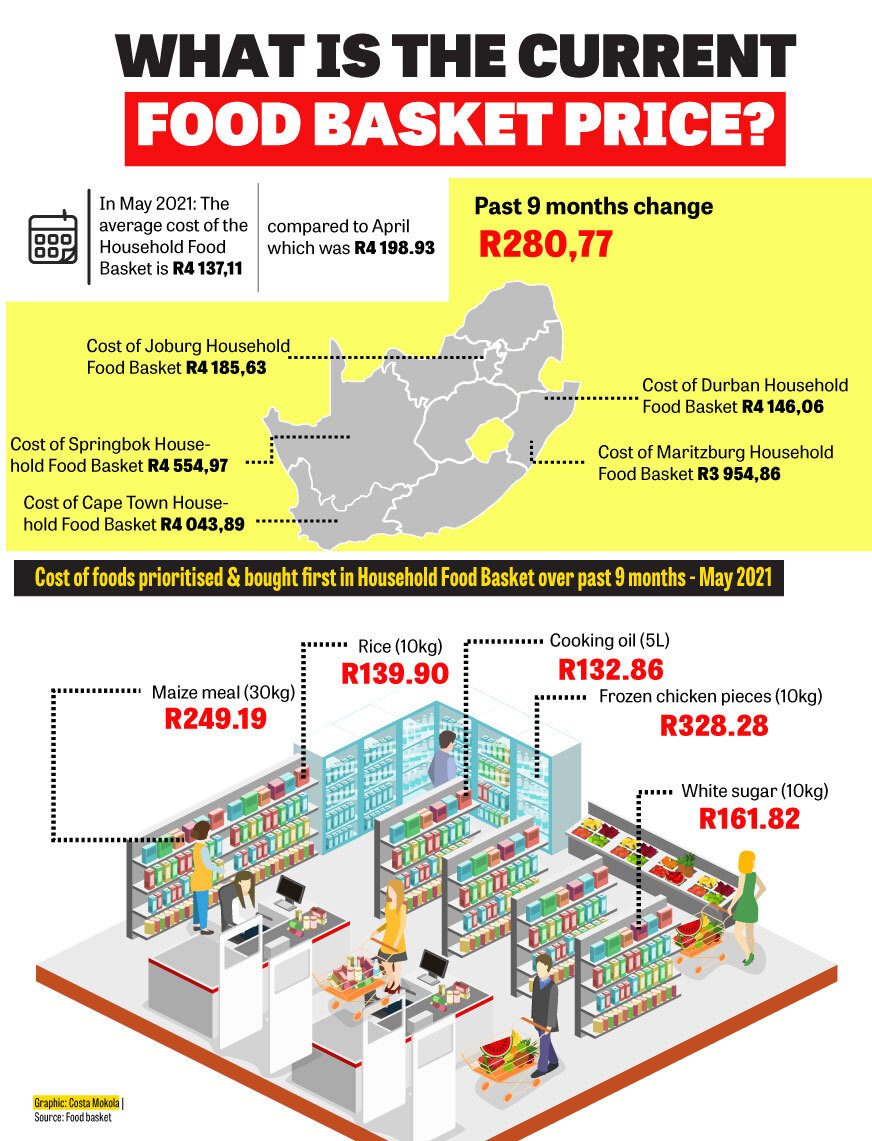 At an average cost of R2 232,12 in May 2021, these core foods are relatively expensive in relation to the total money available in the household to buy food.

Mothers and caregivers spend most of the child support grant on food for their children, while the annual grant increase of R10 is far below food inflation on food.

According to the index’s data, the cost of providing nutritious food for a child costs an average of R24,79 per day if the child’s meal is prepared along with the family’s meal, but poor families say they run out of nutritious food long before the end of the month.

The group has calculated that if the entire child support grant is spent on food, with meals prepared only for the child, the R460 grant will only last for 18 days.

Although this will not mean that most children will eat nothing for the rest of the month, it shows that child nutrition is compromised from day one.

“Disinvesting in children generally, but particularly at this time of crisis, seems to us to be inconsistent with a government which at least in rhetoric commits itself to healthy children, transformation, equity, poverty reduction and economic growth.

“Deliberately and directly under-spending on mothers and children is not without massive negative consequences down the line,” the group says.

“There does not seem to be a credible economic argument for government to continue their stance to underspend on the nutritional needs of millions of our children.

“Simply saying ‘we don’t have the money’ is a lazy response, because it is a matter of allocating resources based on one’s priorities in line with a broader political vision for South Africa.”

According to the group, it is financially it is short-sighted to fail to allocate sufficient resources to mothers to feed their children properly because it will be very expensive in the long term.

“The cost of education and healthcare will increase exponentially, as hungry children struggle to learn, get sick more often, more severely and for longer.”

At the same time, mothers carry the burden of their children’s nutrition by sacrificing their own nutritional needs, deepening the health crisis for South African women.