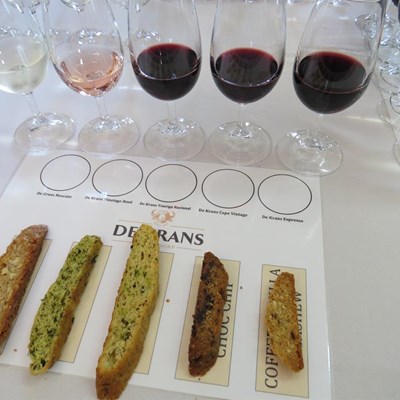 The different wines, ports and biscotti are from left: Moscato with classic biscotti, Pinotage Rosé with mixed herb biscotti, Touriga Nacional with biltong biscotti, Cape Vintage with with allspice choc chip biscotti and Espresso fortified wine with coffee, vanilla and cashew biscotti. Delicious!
BUSINESS NEWS - The first ever South African biscotti and wine tasting which took place at De Krans in Calitzdorp on Saturday 27 August was a huge success.
Hosted by Chef Francois Ferreira, the idea originated with his business partner Denise Lindley, wine lover and gourmand, over lunch at the De Krans Bistro when she tasted the De Krans Moscato.
Liquid heaven...
It reminded her of a restaurant on a small island off Venice where her dessert was Vin Santo with Burano Biscotti. Lindley mentioned this to Boets Nel, the owner of De Krans and Ferreira, who took the idea a step further by creating designer biscotti to suit some of the De Krans wines and ports.
De Krans Bistro Chef Retief van der Walt and his team tested the biscotti recipes and after a thorough tasting, guests can now enjoy five pairings of wines, port and biscotti.
Two of the most popular pairings on Saturday were the Moscato with classic biscotti and the Espresso fortified wine with a vanilla and cashew biscotti. De Krans was the first wine cellar to produce a perlé Moscato wine in South Africa, and once you've taste it, you will be forever grateful that they did! De Krans is open seven days a week.
De Krans Bistro is nestled between vineyards and fruit orchards and guests relax at tables inside or under a vine leaf pergola outside. Chef Retief prepares wonderful meals and a biscotti and wine tasting is the perfect way to end the meal.
The warm hosting skills of Nel and his team makes a tasting at R50 pp an absolute must. Should you be interested in a tutored tasting, ensure to book on 044 213 3314. For more photographs see the gallery at www.georgeherald.com. Guests enjoying good food and wine at the De Krans Bistro in Calitzdorp, just an hour's drive from George.
'We bring you the latest George, Garden Route news'