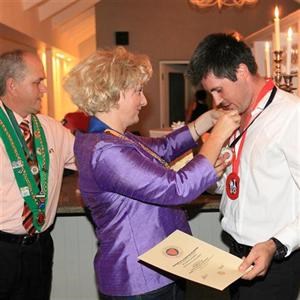 A mixture of excitement and raw nerves was clearly present amongst the young chefs and sommeliers waiting to hear who would be going to the national competition in Cape Town to compete against the other five regional winners. Adding to their anxiety, was the restaurant full of members of the Chaîne's Outeniqua branch, proudly wearing their glittery regalia.

Chefs competition
The chefs competition consists of a mystery basket from which they have to prepare a three-course meal for four people. They get half an hour to view the basket and write their menu and production plan. A further three and half hours are set aside for preparing the meal. The courses have to go out on time, with 15 minutes between each course. The participants lose one point per minute if they are late.

The judging is done by professional as well as non-professional judges who judge on taste, presentation and originality. Two kitchen judges take care of the hygiene, knife skills and wastage in the kitchen. This is all added into consideration and then audited before the winner is announced.

Junior sommelier
The sommelier competition consists of five components:
1. Written exam - this exam covers not only South African wines but concentrates on international wine knowledge which covers French, Australian, German and other new world wines: they have to know which cultivars are planted where etc. They also have to have a knowledge of cocktails and spirits.
2. Decanting - they have to demonstrate decanting procedures of older wines according to international standards.
3. Champagne service - they have to show how to serve Cap Classique/Champagne according to international standards.
4. Blind tasting - they have to taste a range of wines according to the Court of Sommeliers' procedure, naming each wine (the cultivar) and from which region it comes.
5. Identifying spirits and liqueurs - each competitor must identify eight spirits and liqueurs by smell only.

The very demanding competition started at 08:00 and ended at 13:00. The International Jeunes Sommelier Competition will by hosted by South Africa from 17 to 23 September this year. The Chaîne des Rôtisseurs is expecting 15 countries to take part and 12 international judges will be flying in to judge this competition.