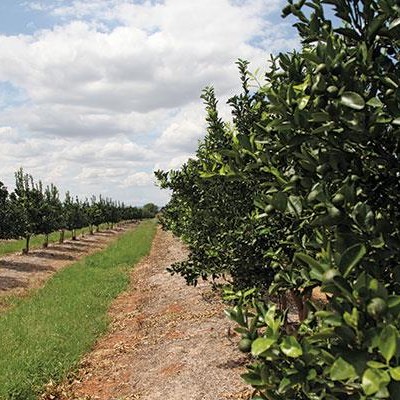 Trees should be spaced adequatly to prevent their growing into each other and competing for space and light. Photo: Gerhard Uys
AGRICULTURAL NEWS - Piet Engelbrecht, who grows citrus on 450ha in the Loskop Valley near Marble Hall, Limpopo, says that the management of a citrus orchard in the off-season determines the success of a harvest.

“The moment the last fruit is picked, the next season begins,” he stresses.

Almost 70% of input costs are incurred during this period, according to Piet. This results in a considerable risk, as there is not much money left over to counter problems such as drought, hail or pests that might occur later on.

Labour costs at this time are a major part of the expenses. “These become sky high the moment we begin pruning, fertilising and irrigating.”

For optimal production, several important factors have to be considered. Managing the health of the irrigated area beneath a tree, for example, is crucial. Mulches, usually wheat straw, are packed under young trees to slow evaporation and lower soil temperatures by 5°C.

This helps root development and keeps the surface of the soil cool, ensuring that the roots do not have to grow too deep to escape the heat. In addition, the mulch decomposes slightly, contributing to humus, letting air into the soil and helping to regulate temperature further.
The importance of pruning
To ensure a good harvest, the tree canopy must be pruned to allow light and air to penetrate it at all levels. If this does not happen, the tree becomes too large and the fruit grows on the outside branches only.

“We’ve been doing more and more pruning over the past couple of years and the results have been good,” says Piet. “Pruning renews a tree. Years ago, no one pruned, or pruned only lightly, and this proved to be a mistake.”

A useful test is to have someone stand on the other side of the tree after pruning. If the person can be identified clearly, the tree has been pruned optimally, he explains.

The pruning begins immediately after picking is complete. Each variety is pruned slightly differently, but the basic principle is the same: shorter, stubbier trees, with a bush-like appearance.
Read more on Farmer's Weekly.