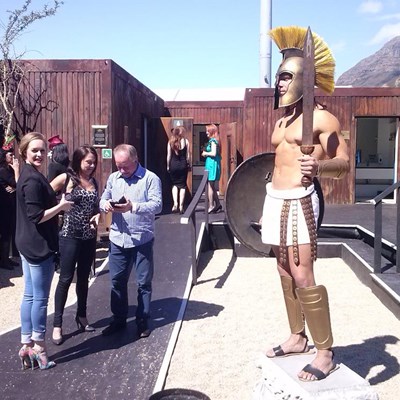 In the top class show Madam Zingara, De Wet du Toit plays two roles: one as gladiator and the other one as Tarzan where he randomly picks a Jane from the audience and kidnaps her.
SOUTHERN CAPE NEWS - Moving from George to Cape Town has most definitely opened doors into the filming and entertainment industry for De Wet du Toit and his twin brother Rudolf.
De Wet, who attracted a lot of attention with his Tarzan shorts on YouTube, is currently in a circus show, Madam Zingara, in which he features as Tarzan as well as a gladiator. Now that the three-month stint in Cape Town is coming to a close he is going to Johannesburg for the next three months for Madam Zingara, in which he gets to rub shoulders with well-known South African entertainers including Emo Adams, Arno Carstens, Jo-Ann Strauss, Marius Weyers, Sandra Prinsloo and Jeanni D. It is in fact a high class variety show.
The ebullient filmmaker said this week, "Being part of Madam Zingara is one of the highlights of my entertainment career. In between, my brother and I made another Tarzan short film called The revenge of Tarzan. It's just a 30min film about three castaways being shipwrecked on a remote island due to one man's deed against a woman named Jane; therefore Tarzan seeks revenge and ends up fighting as a soldier."
Tarzan ambitions
"We were actually approached by someone in the US who came up with the idea of a Tarzan film that involves Tarzan fighting for something. It originally started as a small project but we ended up making a bigger project of it, expanding the film and storyline.
In the meantime, we plan to use this film as a pilot, being the first of two films that will be used as promotional material to pitch to Paramount Pictures and Universal Studios, Hollywood. We gained great connections over the past year.
"A Tarzan TV series has been in my sights for a long time now. The only barrier that lies ahead is the licensing rights, which Warner Bros have with their new Tarzan film to be released in mid-July 2016 starring True Blood's Alexander Skarsgard. As soon as Warner Bros lets go of the Tarzan rights and licences then we will be approaching the Tarzan Company (ERB INC,) to acquire and pursue either a Tarzan TV series or a feature film itself."
The former Georgian added, "The next Tarzan instalment, with a Tarzan vs zombies theme, will be filmed in February 2016 as soon as I'm done with a new theatre-based contract I've recently signed in Cape Town."
Theatre Circus Show
"In the Madam Zingara show I entertain by kidnapping a random Jane from the audience, taking her on stage, doing the Tarzan yell and running off backstage. (November until end of January 2016 at Monte Casino). The show consists of international performers from France, Brazil, China, Ukraine, Argentina, Bulgaria and the UK. Some artists competed on America's got talent.
Having this theatre themed opportunity and to interact with so many different people from diffe-rent cultures is truly fascinating to me, as you learn something new every day. I keep telling myself that variety is the spice of life."
ARTICLE: PAULINE LOURENS, GEORGE HERALD - JOURNALIST
'We bring you the latest Garden Route, Klein-Karoo, Hessequa news'