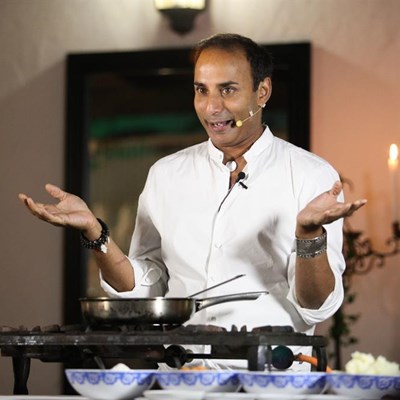 Television chef and top London restaurant owner Reza Mahammad wowed Plettenberg Bay foodies with his skills in the kitchen while giving a cooking demonstration at the Plett Food Film Festival grande finale at The Whitehouse venue on Sa-turday 11 July.
GARDEN ROUTE NEWS - While most foodies enjoy watching their favourite chefs prepare mouthwatering meals on their television screens, there are always a few elements missing from the experience, especially the taste of the delicious food and the aromas from the kitchen.
Over the weekend however, Plettenberg Bay food lovers had the opportunity to be in the kitchen with some of the best local and international celebrity chefs.
These culinary gurus were in town for the second annual Plett Food Film Festival aimed at stimulating the senses through screenings of world-class films that explore food-related topics followed by gourmet culinary presentations by local and international connoisseurs.
Some of these culinary stars included the UK's Spice Prince television chef and owner of one of London's top restaurants Reza Mahammad, and celebrated South African chef, restaurant owner and author Karen Dudley.
"Visiting Plettenberg Bay is lovely. It feels like home and all of you are my extended family," said Mahammad while doing a food presentation to a sell out crowd during the festival grand finale at The Whitehouse venue in Plett on Saturday 11 July.
Mahammad's flamboyancy on television came through in his presentation as he entertained guests with witty humour and even a recital of William Makepeace Thackeray's Poem to Curry while he prepared mouthwatering sweet potato cakes with a hint of India.
Hosting the evening was another star, South African actress Lika Berning, who highlighted Mahammad's series of cooking shows and other achievements.
"Don't swear at me with those words," he quipped when Berning suggested he present a show in South Africa on 'braaing'.
After the food presentation, guests were treated to a screening of the romantic Indian film The Lunchbox, which tells the story of a young wife trying to spice up her marriage and regain her husband's attention by preparing special lunches for him.
However, through the famous Mumbai 'dabbawalas', a lunch delivery system, the food ends up in the wrong hands. After learning about her mistake she leaves a note in the lunchbox for the recipient, a widower, which subsequently leads to a special friendship between the two.
"I really enjoyed the film as it is an amazing movie about the human spirit through food," said Mahammad.
When the lights came on after the movie, Mahammad's Bombay feast, traditional Indian cuisine with Western twists, was revealed, which left guests coming back for seconds and even thirds.
"I approached Reza via Facebook to be our celebrity guest at the festival. He knew and loved the movie, loved the concept of cooking to the narrative of the film, and was immediately keen to come," said organiser Cindy Wilson-Trollip.
"From the minute he arrived, he rolled up his sleeves and got involved in all aspects of the cooking and sty-ling at the venue, and was quite at home in the Nguni restaurant kitchen.
"The cooks from Plett who had the experience of cooking the curries under his guidance had a master class experience and are still on a high. For three days, Reza cooked, told stories, laughed and divulged curry secrets to the girls.
"He gave so much of himself to the event, behind the scenes and with his demonstration and engaging with the festival-goers."
She added that overall the festival was a massive success. "We tripled our numbers for the Plett Food Film Festival this year and have had great feedback from festival-goers who really enjoyed all the events."
Click here for more photos of the event.
Plett Food Film Festival guests dined with the stars including celebrity chef Reza Mahammad and South African actress Lika Berning who ensured a wonderful feast of Indian cuisine was prepared and served. Photos: Ewald Stander
The Plett Food Film Festival's final event on Saturday 11 July attracted a full house and guests were treated to a spread of traditional Indian cuisine with modern twists, all prepared by television chef Reza Mahammad and a local team of kitchen aces.
ARTICLE: YOLANDé STANDER, KNYSNA-PLETT HERALD - CORRESPONDENT.
'We bring you the latest Garden Route news'