Angry demonstrations first erupted on Tuesday night after police detained Pablo Hasel, 32, who was holed up in a university in Catalonia to avoid going to jail in a controversial free speech case.

ENTERTAINMENT NEWS - Dozens of people were arrested in Spain following a second night of clashes over the jailing of a rapper for controversial tweets, with the violence sparking a political backlash.

Angry demonstrations first erupted on Tuesday night after police detained Pablo Hasel, 32, who was holed up in a university in Catalonia to avoid going to jail in a controversial free speech case.

The violence also triggered a political backlash against the hard left Podemos - junior partner in Spain's leftwing coalition - which has opposed Hasel's jailing and publicly supported the protesters.

Police arrested 19 people, while the city's emergency services said 55 people were injured, among them 35 police officers.

In Barcelona and three other Catalan cities, demonstrators lobbed objects at police and set barricades ablaze, with police charging the protesters and in some places firing foam rounds.

A total of 33 people were arrested and 14 injured, police said.

Protesters also took to the streets of the southern city of Granada, clashing with police and burning rubbish bins, with four people arrested, regional officials said.

Although known for his hard-left views, Hasel's case has become a cause celebre among campaigners, who say prosecuting him is a dangerous assault on free speech. 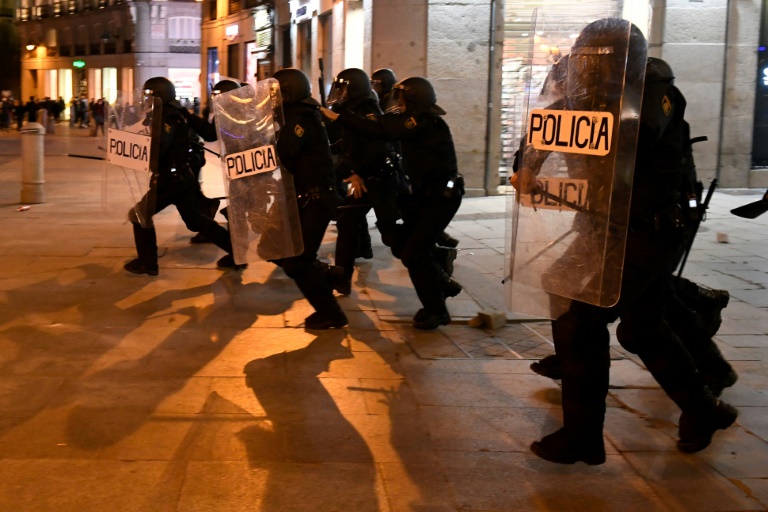 Hundreds gathered in a Madrid square calling for Hasel's release, hurling bottles at police, who charged at them in clashes lasting several hours, AFP journalists said.

The violence was roundly denounced by figures across the political spectrum with Socialist deputy prime minister Carmen Calvo saying it was indefensible.

"No right can be defended or expressed with violence. That is an absolute red line," deputy prime minister Carmen Calvo told RTVE public television.

"An unauthorised demonstration that resulted in arrests, injuries and a lot of material damage does not equate to freedom of expression."

So far, Prime Minister Pedro Sanchez has remained silent on the Hasel case and the protests, which have highlighted a growing divide between his Socialists and Podemos, which emerged out of the anti-austerity "Indignados" movement that occupied squares across Spain in 2011. 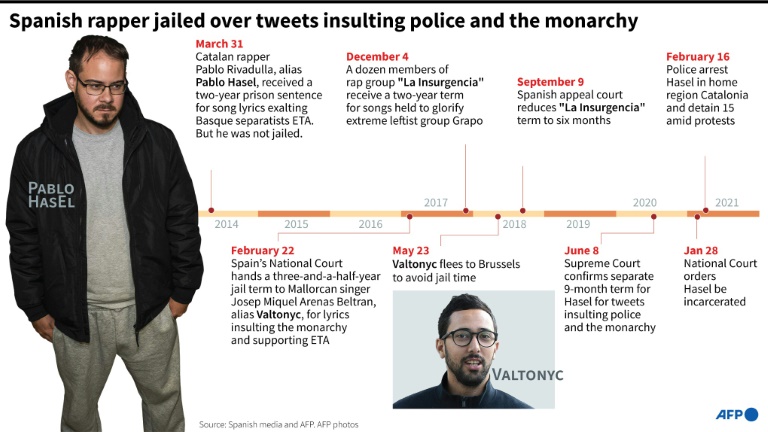 A chronology of legal spats for Spanish rappers whose anti-establishment lyrics and tweets have landed one of them in jail.

In the immediate firing line was Podemos MP Pablo Echenique who publicly tweeted his backing for the protesters as the clashes were raging.

"All my support to the young anti-fascists who are demanding justice and freedom of expression in the streets," he wrote.

But much anger was directed at Podemos leader Pablo Iglesias - also a deputy prime minister - who has criticised Hasel's jailing and used it to question Spain's democracy. 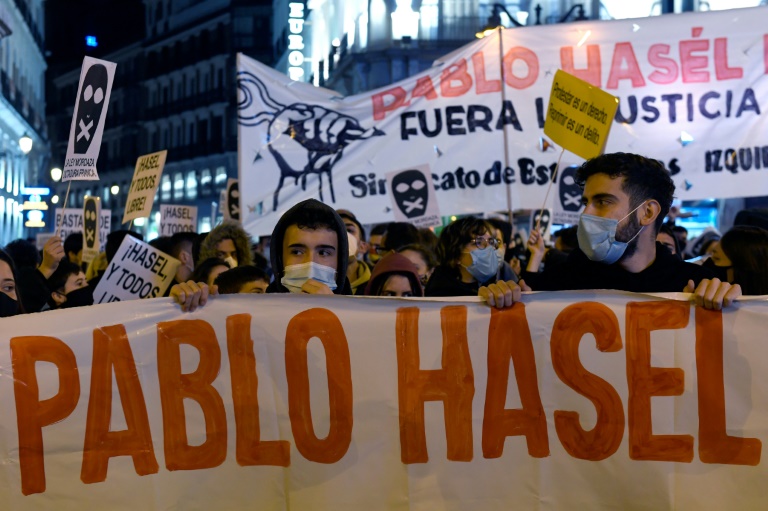 Hasel was convicted over tweets calling former king Juan Carlos I a mafia boss and accusing police of torturing and killing demonstrators and migrants.

"They have to remove Pablo Iglesias from the Spanish government. It is the only way to turn away from this dangerous path we're going down," Cuca Gamarra, spokeswoman for the opposition Popular Party's parliamentary faction.

"(The Socialist Party) cannot be complicit in the face of what's going on.. and this display of 'Trumpism' we're seeing from Podemos' leaders," she told RTVE, referring to Donald Trump's bid to incite supporters to storm the US Capitol last month.

Hasel was arrested after failing to turn himself on Friday in to start serving his nine-month sentence over tweets calling former king Juan Carlos I a mafia boss and accusing police of torturing and killing demonstrators and migrants.

Hundreds of artists have rallied to his cause, including film-maker Pedro Almodovar and Hollywood actor Javier Bardem, while Amnesty International said jailing him for song lyrics and tweets was "unjust and disproportionate".