Unusual places to visit in SA

Looking for a change in your holiday routine? Be sure to read this selection of unusual destinations to visit this December.

Bathurst is known as the Pineapple Capital of South Africa.

NATIONAL NEWS - The holiday season is virtually upon us, and many South Africans are planning to visit their favourite holiday destinations within a few days.

However, if you haven’t confirmed your holiday arrangements and are still planning to dash off this December, there are some unusual attractions in our beloved South Africa.

1. Bathurst, Eastern Cape
Why? Well, Bathurst is known as the Pineapple Capital of South Africa and is home to the largest artificial pineapple in the world.

At 16,7m, the gigantic pineapple it’s 70cm higher than the Big Pineapple on the Sunshine Coast of Australia.

2.The Big Baobab, Limpopo
Fancy having a holiday drink somewhere unusual? If so, visit the Big Baobab at Sunland Nursey in Limpopo. The enormous 22 metre high and 47 metre wide tree holds a pub within its trunk.

The tree is considered to be the largest baobab tree in the world and is estimated to be around 6 000 years old.

3. Cradle of Humankind, Gauteng
This remarkable World Heritage Site is less than an hour’s drive from Johannesburg, near the Witwatersberg and Magaliesberg mountain ranges.

Be sure to visit the amazing site and tour the Sterkfontein Caves, where scientists have discovered many hominid and animal fossils dating back more than 4 million years.

Maropeng and its exhibition centre allow visitors to sail through the various stages of Earth’s formation on an underground boat. There is also an abundance of flora, fauna and bird life to enjoy.

This unusual feature is apparently the product of volcanic and erosive forces which took 100 million years to form. 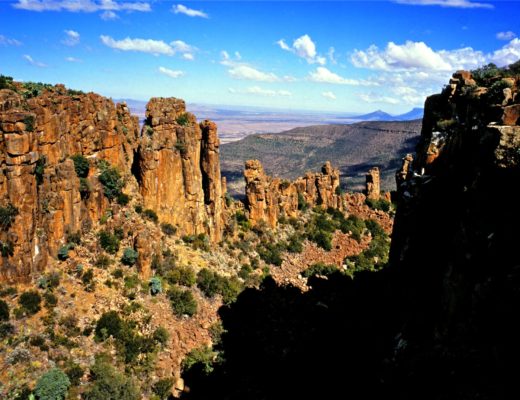 The Valley of Desolation.

5. The Shoe House, Mpumalanga
If you have children or simply fancy nursery rhymes coming to life, then this is a must-see. With a small museum, art gallery, Alfa Omega Cave curio shop, and tea garden, the Shoe House offers a quaint escape from the regular sights seen during the holiday season.