NATIONAL NEWS - A moderate tropical storm named Eloise, currently making its way across Madagascar, is expected to increase in intensity over the next few days.

According to the South African Weather Service (SAWS), Eloise is likely to escalate to a severe tropical storm category, which would see winds exceeding 100km/h.

Eloise is expected to make landfall in eastern Madagascar late on Tuesday, with warnings of flooding and washdays.

There is also a storm surge risk, especially along the southernmost part of the storm system, SAWS said.

The storm is expected to move across towards the Mozambique channel on Friday and could make landfall along the country’s southern coastline, between Beira and Vilanculos, this weekend.

It could also move further down Mozambique’s coastline, with a possibility of it moving into the northeastern Lowveld region of South Africa.

SAWS forecaster, William Msimanga told The Citizen that most of South Africa will continue to experience dry conditions as the storm moves over Madagascar, but that moisture is expected to affect the north-eastern, northern, and eastern parts of the country this weekend.

Limpopo, parts of Mpumalanga, and KwaZulu-Natal will likely see an increase in rainfall from this weekend, Msimanga explained.

He said the SAWS will be closely monitoring the storm system to see how it will affect South Africa from Monday until next week. 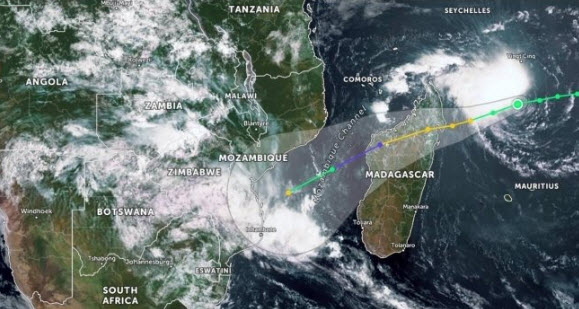