It’s not every day that you get a call from Jaguar asking if you’d like to participate in its annual Simola Hillclimb event. 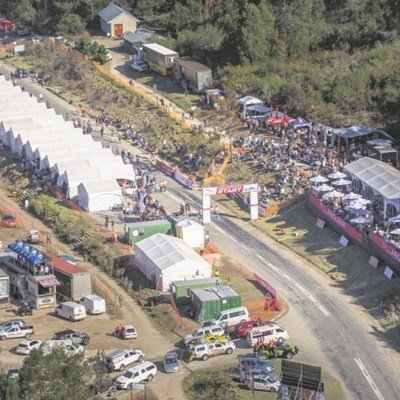 I faintly remember a resounding “Yes” escaping from my mouth as I tried, with every inch of me, to retain some sort of professionalism during the conversation. So that was it, I would be participating in the eighth instalment of this event, which has become one of the highlights of the local motorsport calendar.

What is the Hillclimb?

For those of you unfamiliar with the event, in very basic terms, it’s a steep, twisty 1.9-kilometre section of the Old Cape Road in the Knysna region of the Garden Route in the Western Cape, that is closed off for one week each year. When not populated by the best South African motorsport competitors, the road is a rather unassuming stretch of tarmac used to access the Simola Golf and Country Estate.

The road in question presents a series of tight turns and challenging judgement decisions for competitors with the end goal of posting the fastest possible lap time up the hill. The Old Cape Road and some of the access roads that surround it are used by competitors, event organisers, media and marshals alike to both enter and exit the racing section.

The relatively short stretch of road can be completed in less than 42 seconds by a fast car and a capable driver, with average speeds said to reach up to 170km/h in some of the more exotic Hillclimb monsters.

How is the event structured?

This year’s event ran from the 4-7 May with Thursday the 4th being used for the annual Speed Festival Charity Golf Day at the Simola Golf and Country Estate in aid of Knysna Animal Welfare, Lions Club Sedgefield, Sivuyela School for the Deaf / Masithandane (Benefactor: MG Car Club Southern Cape) and the Knysna Sports Academy.

The 5th of May this year was reserved for Classic Car Friday with 60 slots available for drivers of machinery from yesteryear, which is always a treat to behold. Then, the main event, which took place on Saturday the 6th and Sunday the 7th of May is called the King of the Hill competition.

The atmosphere, and indeed the rivalry amongst the competitors, is palpable. There’s a buzz, but not the sort you get from a concert or at a party; it’s more of a nervous excitement which I’d liken to a group of 100-or-so individuals queuing for their turn to bungee jump off of a bridge.

Combine the frenzied spectators, anxious drivers, frenetic pit crews with the sound of cars of all sorts together, and you have a motorsport cloud waiting to burst over a short 1.9 km stretch of tarmac draped over a steep hill leading to an upmarket estate.

My alarm went off at 6:00am on Saturday morning, at which point the event suddenly became very real. I opened my bag and took my racing paraphernalia out and proceeded to suit-up.

After barely managing a bowl of bran cereal, I made my way down to the pits for the driver briefing. Before I knew it, the first practice session was underway, meaning I needed to be in my car, with my helmet and gloves on waiting for a marshal to flag me through the pits.

After coasting through the pits, before I knew it, I was at the start line with a marshal counting me down from five. It was at this point where my hearing became a bit fuzzy, with a faint ringing sound in the background. I removed my left foot from the brake and was off, barrelling towards the first corner, which is a fast left-to-right sweep. I took it easy before going flat taps up the hill towards the infamous bridge section.

I was on the brakes far too early, but tried to carry more speed through the sharpest left hander on the course. It was then a short sprint before the famous ‘esses’, which includes severe direction changes before you cross the finish line. Before I knew it my lap was done. I had managed a 53.6 second run up the hill on my first attempt.

he rest of my Saturday was spent waiting for my remaining practice and qualifications runs, while I chipped away at my times up the hill. My second run was a 51.3, followed by a 51.00 and then a 50.7.

I was impressed with the XE S that Jaguar had allowed me to take up the climb; its chassis, engine and driver feedback was excellent and allowed me to explore its limits without intimidation. And then of course there was the whine from the supercharger combined with the howl of the V6 lump up front.

In the first qualification run of the day, I went out and stitched together a solid lap, returning a time of 49.9 seconds. With that time under my belt, I rested a bit easier that evening, but I knew that the competition between me and Hannes Visser from La’t Wiel was heating up, with just a tenth of a second between us.

The final day at the Hillclimb was a day of mixed emotions for me. I was so excited to see some of those incredible drivers and their machines barrelling up that hill at insane speeds.

At the same time though, I was having a battle with myself, a battle to shave off a few tenths up that infamous hill. The warm-up lap went well; I took it easy before the first qualification run of the day took place.

This is where it all seemed to go wrong; I nailed the first two corners, but went in to the first section of the ‘esses’ a bit too quickly. The initial understeer turned to oversteer before my right rear wheel touched the dirt on the outside of the corner.

I managed to correct the slide and prevent an accident, but it’s safe to say that I was rattled. The runs that followed were approached with caution and while I pushed hard, I could not match my best from the previous day. My colleague, Mr. Visser, managed a time of 49.8, meaning we were still only separated by a tenth of a second; now that’s what I call racing.

In conclusion, my experience at the Hillclimb was the proverbial baptism of fire, but I would go back and do it all again in a heartbeat. Nothing makes you feel quite as alive as being involved in close motor racing. As for that hill, I hope to take on its hallowed tarmac again in 2018.