TO SAY I’m not a fan of al fresco motoring is a bit like saying I’m not quite fond of dubstep. 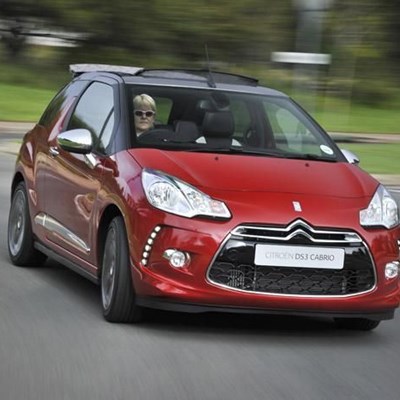 I hate roof-down motoring almost as much as I hate this new-fangled music genre that’s basically just a collection of stupid everyday noises distorted by a computer programme. It’s nowhere near as noble - or influential for that matter - as metal and or rock ’n roll.

It’s also not very rock ’n roll to drive with the roof down. A quick check on the internet substantiates my statement, as none of the rock gods of our age - or any age for that matter - own one. Dave Grohl drives around Beverly Hills in a vintage Ford van and Keith Richards had a Bentley saloon. Even The King himself had a Cadillac with a fixed roof…

The fact that Citroën took the roof off one of my favourite cars of all time doesn’t help. I adore the DS3, because it pukes all over this retro-design phase the world is currently caught up in. It also puts a massive grin on your face, thanks to a meaty 1.6-litre turbocharged powertrain.

At least the good looks are still present on the DS3 Cabriolet. You have to be standing right next to it to spot the fabric roof, so in essence it’s still the car I love so much. It’s small and compact, but with a muscular stance and cheeky attitude. It’s like a fox terrier with wheels.

The interior is even better than on any DS3 I’ve experienced before. The dashboard and centre console are as stylish as the exterior. The materials Citroën chose are also top-notch and the standard specification is quite generous. Our test unit came equipped with the optional eMyWay Navigation, which works a charm, but is a tad expensive at over R10 000.

The DS3 Cabriolet I drove was blessed with the same 1.6-litre turbocharged powertrain you get in the top-of-the-range hatch. It’s a fantastic little engine that develops 115kW and 240Nm of torque. It’s mated to a six-speed manual, which really allows you to connect with the car once the road clears up and it’s safe to step on it.

Unfortunately, this leads me to the major gripe I have with the cabriolet. Citroën says it’s only 25kg heavier than the hatch, but it feels more than that. Perhaps I’m too used to the power delivery in the hatch, which is eager and willing to pander to hooligan tendencies. The cabriolet feels like it’s more suited to a laid-back personality. It’s not slow, but it doesn’t give you that same warm feeling you get from a car that does a proper job of hurling itself at the horizon.

It’s a pity, because I really do like the roof arrangement on the DS3. It’s not really a cabriolet, but rather a hatch with a glorified canvas sunroof. This means you’re not as exposed as you would be in a normal cabriolet and you can open it at speeds of up to 120km/h. As someone who was once on the receiving end of a hobo’s spit missile while seated in a normal cabrio, I really appreciate the added safety.

I could easily live with the style and the canvas sunroof, but as a huge fan of the turbocharged hatch, I couldn’t live with the blunted performance. If I was going to buy a DS3 - and I really would have one by the way - it would be in traditional hatch format.

There’s an easy way past this problem: buy the entry-level 1.2-litre three-cylinder model. It has zero performance aspirations, so it allows the DS3 cabriolet to exist as an exercise in style alone. On this front, the DS3 does really well. If you’re in the market for something rapid and wonderful to drive, you’d be far better off with the DS3 hatch, or the new Ford Fiesta ST (which is a lot cheaper that the DS3 cabrio, by the way).

If you want a care-free car with a roof that comes down so other people can look at you, get one of these.