LIFESTYLE NEWS - For more than a year after being moved to a Jordanian wildlife reserve from war-hit Syria, two bears, Loz and Sukkar, would cower whenever planes flew by, traumatised by past bombardments.

They are among dozens of animals that have been rescued from regional war zones, including the Israeli-blockaded Gaza Strip, and brought to Jordan's Al Ma'wa For Nature and Wildlife.

The sanctuary located in Jerash province north of Amman was set up by the Princess Alia Foundation, named after the king's sister, in cooperation with the international animal welfare organisation Four Paws.

Sukkar (sugar in Arabic) and Loz (almond) are Asian black bears, now aged nine, who were trapped by war in the Magic World Zoo outside Syria's second city, Aleppo, before being rescued in the summer of 2017.

"When they were brought here they were terrified by the sounds of aircraft, especially helicopters and for more than a year they would hide in a room inside their pens each time they heard planes go by," said caretaker Khaled Ayasra.

The black bears are among 26 animals - eight lions, 12 lionesses, two Bengal tigers and four bears - who live in the sprawling 1.4-square-kilometre sanctuary in a wooded mountainous region.

Most were rescued from Syria, where the conflict has raged since 2011, as well as the conflict-riddled Gaza Strip where Israel has fought three wars since 2008 with the territory's Islamist rulers, Hamas. 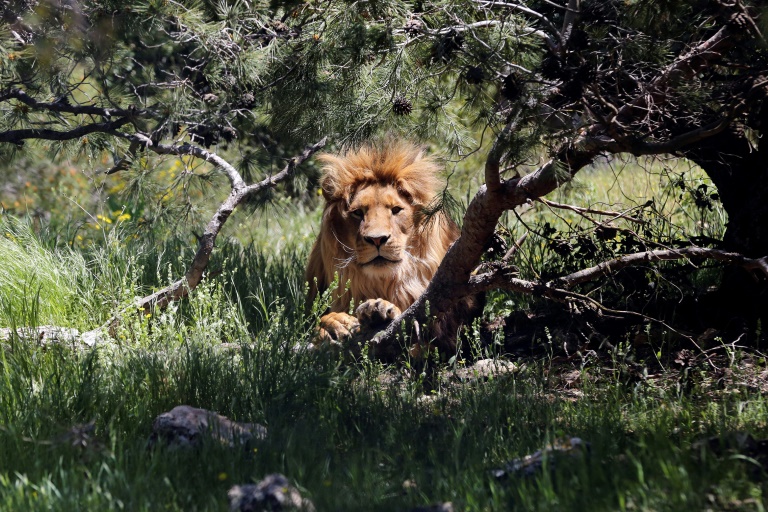 Most of the animals at the Jordanian wildlife reserve were rescued from Syria. 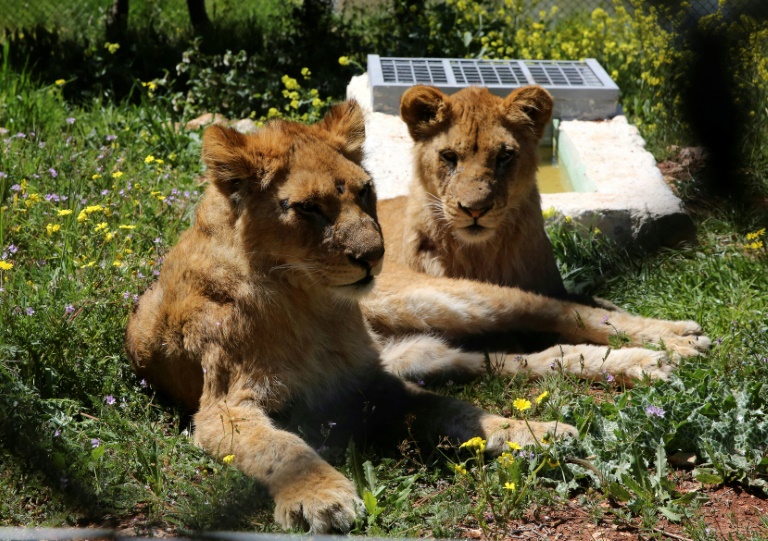 The sanctuary in Jerash province north of Amman cares for 26 animals.

Only one animal - a bear called Lula - was evacuated from Iraq.

Martin Bauer, spokesman for the Vienna-based Four Paws, said most of the animals were in poor physical and psychological condition before being rescued and "often sensitive to loud noises".

"They are usually emaciated, their teeth are in bad condition and... also suffer from psychological trauma," he told AFP.

Before they reach the sanctuary, the animals are taken to the New Hope Centre, a veterinary clinic linked to the Jerash reserve, where they are provided with medical care and undergo rehabilitation. 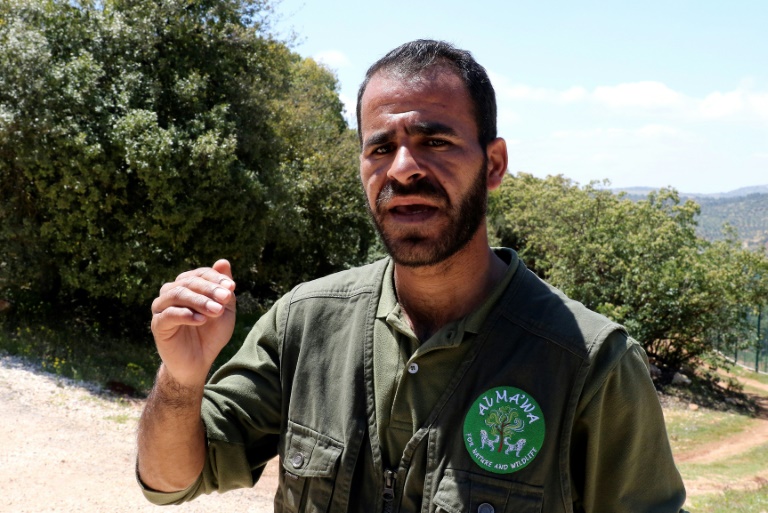 Caretaker Khaled Ayasra (pictured) says that when the animals arrive they remain scared of aircraft noise after their experience in war zones.

Some are then sent back to their country of origin, while others are released into the wild or brought to the sanctuary to start a new life.

"In our sanctuaries the animals have the chance to recover from the hardships of their past and very often their natural instincts come back after a while," said Bauer.

He said proper food and medical care is "extremely vital" for their well-being, but the animals must also be able to trust their carers and regain self-confidence.

Loz and Sukkar have made huge strides since coming to Jordan.

"They are happier and love to play and meet visitors," said Ayasra.

Workers at the sanctuary use all sorts of means to help the animals recuperate after years of hardship. 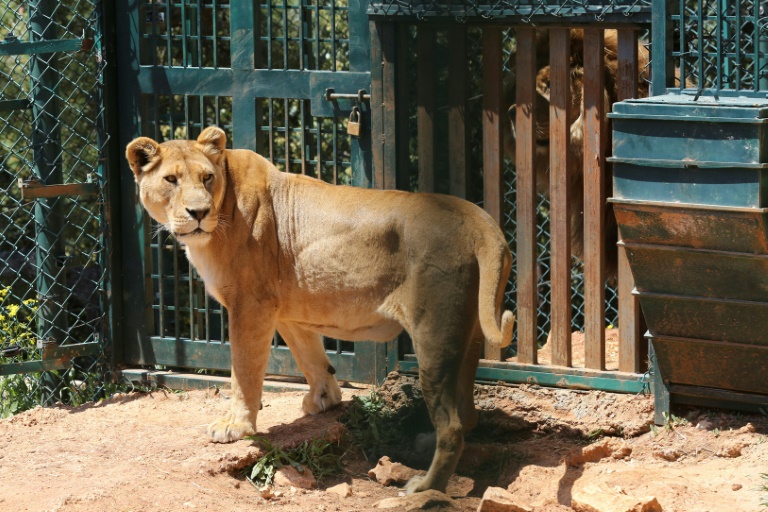 Before they reach the sanctuary, the animals are taken to a veterinary clinic linked to the Jerash reserve, for medical care and rehabilitation.

They are given a balanced diet, toys such as balls to play with and even an aromatherapy type of treatment - natural herbs and spices placed in pails inside their pens - to help them relax.

Bears eat 16 kilos (35 pounds) worth of fruit and vegetables daily, while the lions are given seven to 15 kilos of meat three times a week.

Sultan, the lion, and Sabreen, a lioness, are among the animals who found a new lease on life at the Ma'wa, after their rescue by Four Paws in 2014 from a Gaza zoo following Israeli bombardment.

At first, "Sultan was very, very nervous and would destroy everything he found inside his enclosure," said Ayasra. "But now he has calmed down and likes to greet visitors."

Al Ma'wa CEO Marek Trela, a Polish veterinary surgeon, said the sanctuary aims to "give a better life to animals who have suffered in different ways". 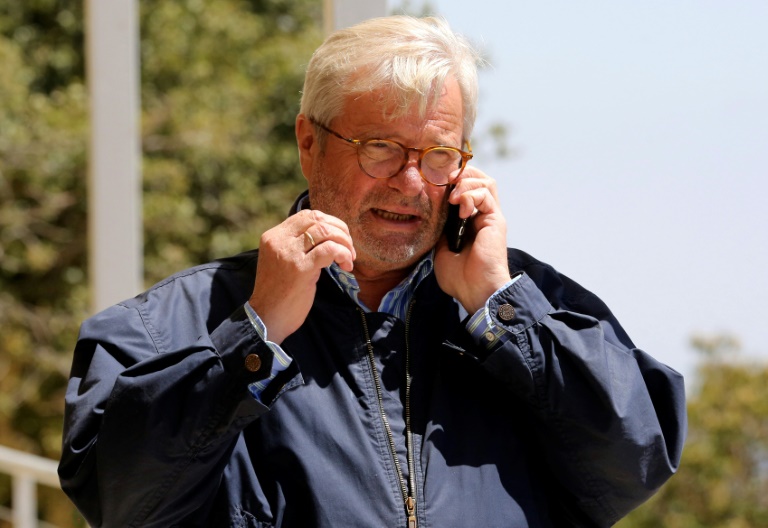 Al Ma'wa CEO Marek Trela, a Polish veterinary surgeon, says the reserve "is very similar to their natural habitat" and helps the animals to thrive.

The wildlife reserve "is very similar to their natural habitat" and helps them to thrive as they return to an uncrowded, natural environment, he said.

"If they like to see people they can... if they don't want to they hide in the forest and they live their own life. That is what we are trying to give them after the hard time they had," said Trela.

"The most important thing is to let them live their own life... to live the way they like," said Trela, a former vice president of the World Arabian Horse Organization.

Although it is not a zoo, visitors can tour the reserve and spend some time with the animals for an entrance fee of five dinars (around $7).

Over the past five years, Four Paws has rescued nearly 100 animals from Gaza, Syria and Iraq, including 43 who were brought out of the Palestinian territory in April.