On Friday evening in Gaza, Palestinian families had rushed to seaside cafes to breathe fresh air or smoke shisha.

People walk past a damaged shop in Al-Rimal commercial district in Gaza City on 22 May 2021.

INTERNATIONAL NEWS - Cafes reopened, fishermen set out to sea and shopkeepers dusted off shelves Saturday as Gazans slowly resumed their daily lives after a deadly 11-day conflict between Hamas and Israel.

Aid trickled into the Gaza Strip, the blockaded enclave controlled by the Islamist group Hamas, as the focus turned to rebuilding the devastated territory a day after a ceasefire took hold.

The Egypt-brokered truce halted Israeli air strikes on the crowded Palestinian territory and rockets fired by Palestinian armed groups at Israel since May 10. 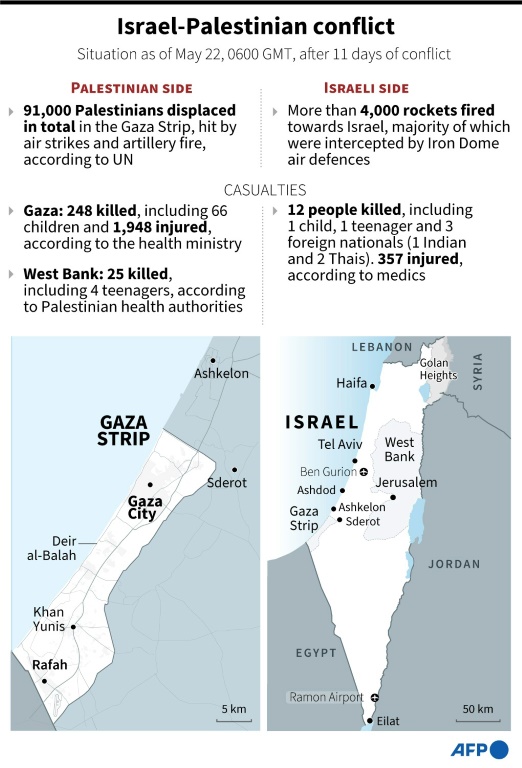 Rescue workers searched for bodies or survivors in mounds of rubble after what Gazans referred to in the street as the latest "war" or "escalation" with the Jewish state.

In Gaza City's port, Rami Abu Amira and a dozen other fisherman prepared their nets before heading out to sea for the first time in two weeks. 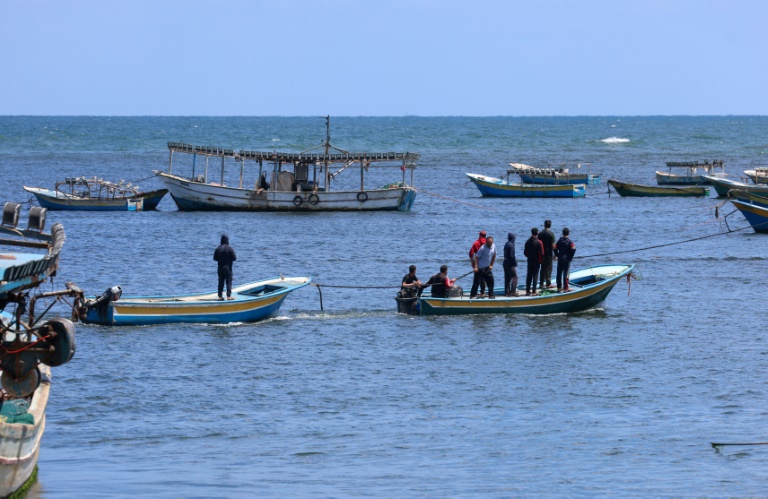 Palestinian fishermen set out to sea from Gaza City after a ban on fishing was lifted.

"We need to eat," he said after the Gaza coastguard allowed fishing again, though adding he would stick close to the coastline to stay safe.

"We, fishermen, are scared the Israeli navy will shoot at us. It's up to everyone to decide whether to go or not."

The latest round of bombardment killed 248 people in Gaza, including 66 children, and wounded more than 1,900 since May 10, the Hamas-run health ministry says. 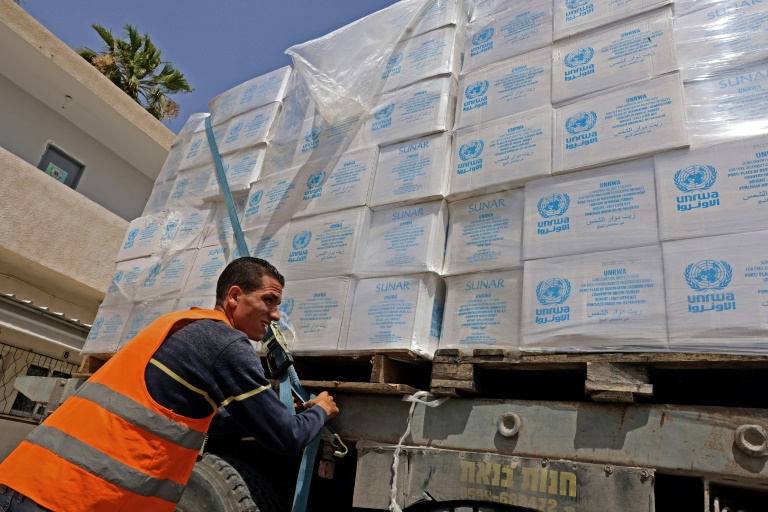 A truck loaded with humanitarian aid passes through the Kerem Shalom crossing into Rafah in the southern Gaza Strip.

The United Nations says more than half of those killed, the overwhelming majority in Israeli air strikes, were civilians.

Israel says it has killed "more than 200 terrorists", including 25 commanders.

During the same period, rockets fired by Palestinian armed groups killed 12 people in Israel including one child, a teenager, an Israeli soldier, one Indian and two Thai nationals, the police say. Some 357 people in Israel were injured. 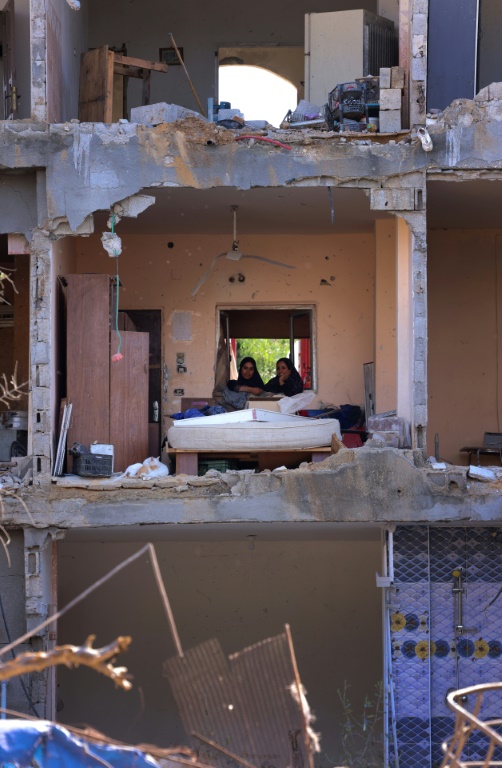 Palestinian women sit in the rubble of a building, destroyed by Israeli strikes, in Beit Hanun in the northern Gaza Strip.

On Friday evening in Gaza, Palestinian families had rushed to seaside cafes to breathe fresh air or smoke shisha.

In a clothes store near the ruins of a ravaged tower block in the upscale neighbourhood of Rimal in Gaza City, mannequins still wore the latest 2021 trends, but they were now caked in dust.

Bilal Mansur, 29, said all his merchandise had been ruined.

"There's dust everywhere, dust from the Israeli bombs clinging to the clothes. We won't be able to sell them," he said.

Nearby store-owner Wael Amin al-Sharafa said he had stocked up his shop with new clothes to sell during the usually busy season of Eid al-Fitr at the end of the Muslim fasting month of Ramadan.

Convoys of lorries carrying aid began passing into Gaza Friday through the Kerem Shalom crossing after it was reopened by Israel, bringing much-needed medicine, food and fuel. 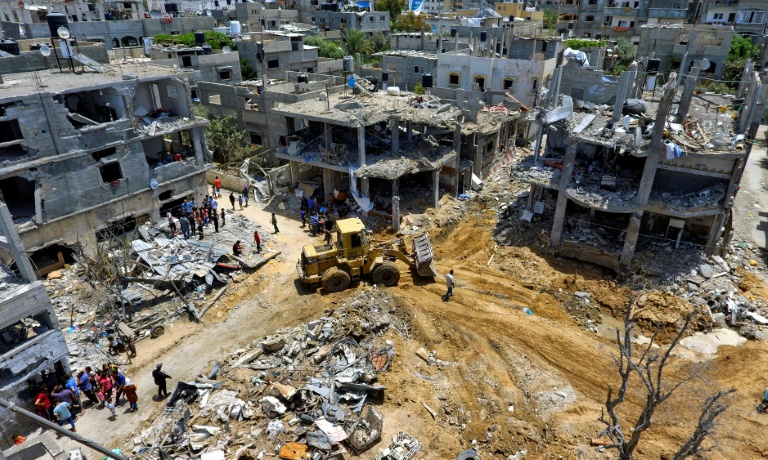 Gazans use a front-end loader to clear away rubble in Beit Hanun, in the northern Gaza Strip.

The latest round of Israeli bombardment forced 91,000 people to flee their homes in Gaza, the UN humanitarian agency says.

It has hit 1,447 homes, completely destroying 205 residential blocks or homes, as well as ravaged electricity and water supply, according to the Gaza authorities. 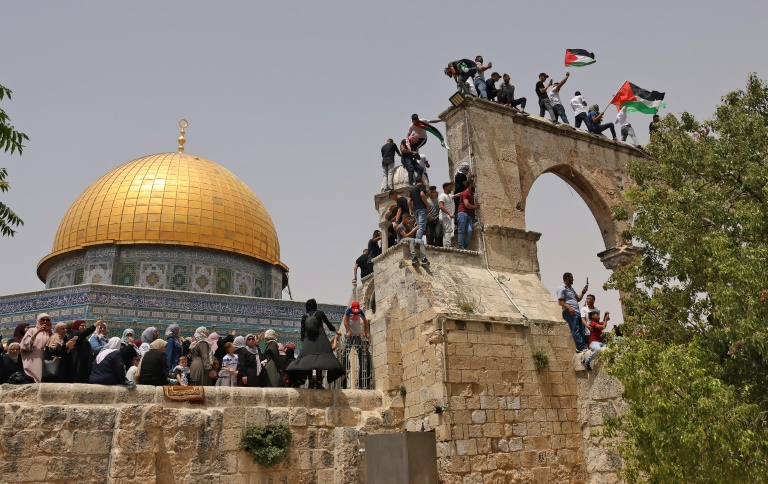 Both sides were fast to claim victory, as Egyptian state media said two Egyptian security delegations had arrived to monitor the deal.

Hamas' political chief Ismail Haniyeh said they had "dealt a painful and severe blow that will leave its deep marks" on Israel, and thanked Iran for "providing funds and weapons".

The international community welcomed the ceasefire.

US President Joe Biden pledged to help organise efforts to rebuild Gaza and said creating a Palestinian state alongside Israel is the "only answer" to the conflict.

"We still need a two-state solution," he said.

Peace talks have stalled since 2014 including over the key issues of the status of occupied east Jerusalem and Israeli settlements in the West Bank.

In a reminder of ongoing tensions despite the ceasefire, Israeli police on Friday fired stun grenades at worshippers in the highly sensitive Al-Aqsa mosque compound in Jerusalem.

Israeli forces beat an AFP photographer who was covering the unrest there. 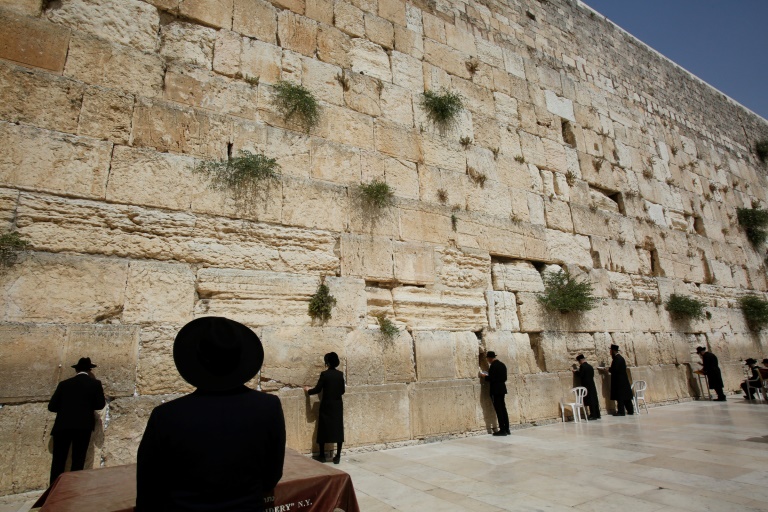 Ultra-Orthodox Jewish worshippers pray in front of the Western Wall in Jerusalem on 21 May 2021.

The incident was reminiscent of the tensions in Jerusalem that sparked the latest round of conflict.

Israeli security forces had cracked down on protests against the expulsion of Palestinian families from their homes to make way for Jewish settlers in the occupied east Jerusalem neighbourhood of Sheikh Jarrah.

And they had also moved in on worshippers at Al-Aqsa, Islam's third holiest site. 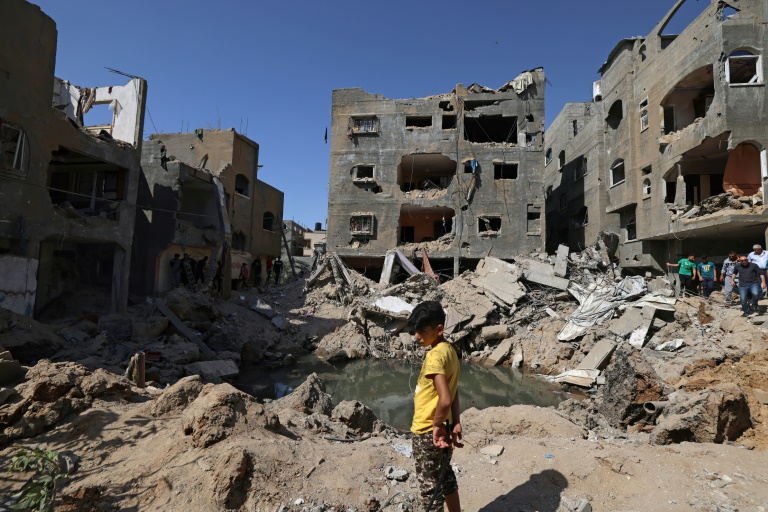 A Palestinian child stands amidst the rubble of buildings, destroyed by Israeli strikes, in Beit Hanun in the northern Gaza Strip.

Hamas on May 10 launched of rockets from Gaza towards Israel, in "solidarity" with Palestinians in Jerusalem.

The conflict sparked mob violence in Israel, and clashes between Israeli forces and Palestinian protesters in the West Bank.

Israeli forces have killed 25 Palestinians, including four under the age of 18, in the West Bank since May 10, the authorities in the territory say. Israel claims five tried to attack Israeli forces.